Yumi Ishiyama is a highly valued member of the Lyoko Warriors from the French animated television series, Code Lyoko. She is considered the maturest of the group, being a year older than the rest of them (beside William), and takes care of the younger members.

With the Lyoko Warriors

Yumi was born in Kyoto, Japan, although her family immigrated to France when she was just a baby. Having been raised among traditional Japanese values, she shows complete respect for her parents, sometimes even to excess. She attributes a lot of importance to her origins, being more than proud of her Japanese heritage which can be seen when she firmly asserts her ethnic background as Japanese. She has even planned later to return to her roots.

Aside from her complicated romance with Ulrich, one of Yumi's other main character focuses is her parents rather unstable marriage, which has proven to be a major strain on her from time to time. Her father and mother can often be heard bickering in the background whenever an episode takes a focus on her home, and at one point, her father even left the house and shortly resided with a co-worker from work which took place in Laughing Fit. This is shown to have had a major strain on Yumi as she struggled to understand why her parents were arguing in the first place.

Although it is often dismissed, she is seen to have a small attraction to William which is often seen at many points in the series. Despite this, Yumi claims he is nothing more than just a friend. These feelings are never ventured, however, rather than just a minor attraction.

On Lyoko, Yumi is virtualized in geisha form before her avatar is soon re-designed as a ninja in season 4. Equipped with formidable metallic fans with defensive properties (acting as shields) and also as offensive missiles, she proves to be a considerable adversary against the monsters of X.A.N.A. Along with her sharp fans used like ninja stars, she also has telekinetic powers for making life difficult for the henchmen of the computer villain. It is realized in the first 3 seasons that using her telekinetic power on Lyoko is painful and can easily and quickly exhaust her. But soon, in season 4, this proved to be no longer an issue with her new Lyoko design. Yumi, like Ulrich, has a strong interest in Pencak Silat which is very useful in battles on Lyoko and is shown to excel in the art. She is seen regularly practicing moves with Ulrich or in a professional class at Kadic.

Outside of Lyoko, Yumi seems like one of the more normal characters. Having a normal family with regular sibling rivalry. Other that the Lyoko Warriors, Yumi is more or less a wall flower, often secluding herself from others despite having potential for popularity. Yumi is in ninth grade for seasons one and two and in the 10th grade in seasons three and four. In the first three seasons, she was fourteen years old, but had turned fifteen in Lab Rat. This implies that Yumi is now sixteen years old, as Code Lyoko Evolution takes place one whole year after the original series.

In regard to Yumi's personality, her instant trademark is how she is shown to always prefer black clothes, basically the American goth look - with black sweater, black pants, and black boots. Her season 4 outfit is like her sports clothes consisting of a dark gray blouse and dark pants. She wears the same boots as in season 1-3. (This being seen in Cold Sweat where when an embarrassing childhood Halloween photo of her is seen, she is wearing big black boots in the picture.) She inspires coldness and distance at first glance. Rather abrupt and often of a sarcastic humor, she can seem particularly stiff and ironic. But this appearance exists only to hide her generous and sensitive inner nature, because behind this mask hides a being filled with warmth and with human qualities such as kindness, helpfulness, delicacy and sincerity. Yumi is shown to prefer getting acquainted and knowing people first before opening up to them, but once trust is established, she assumes a limitless fidelity towards the people whom she likes.

A fine observer, she is adept at understanding people and emotion. Good at sports, very smart (as seen by her responses to difficult situations), a hundred percent natural, she is the perfect opposite of Sissi and is very popular, although she seems oblivious to it. Also differing from girls her age, she rather prefers the company of boys, with the only girl she is shown to be close with is Aelita. Yumi is also a very applied pupil, who excels particularly in the literary subjects. Considered as having a great scholastic potential, she has the respect and trust of her professors which can be seen throughout the series.

The relationship of Yumi and Ulrich is complex and often very ambiguous since they often don't share their thoughts about each other often, even though their feelings are more than obvious throughout the course of the show. In X.A.N.A. Awakens Part 1 and 2, showing how Ulrich and Yumi first met, the two can be shown to have something of a first attraction to each other which significantly grows throughout the episode. They two almost kiss in the season 1 episode Routine, after their repressed attraction and feelings come to head, but they decide to keep it a secret. Strong respect, mutual admiration and reciprocal feelings (although distant) join these two figures in a very strong relationship. They often find themselves wavering between platonic friendship and genuine romance on a regular basis throughout the show. In Exploration, however, Yumi admits to her parents that she's "in love" when they begin to get suspicious about her daily late night trips to Lyoko and want an explanation. When her friends ask her what she told them, she simply says she "told them the truth" and smiling at Ulrich.

However, in the opening of season 3, Yumi declares that they need to assume a platonic relationship status once and for all and announces that they can be just good friends, but nothing more. This clearly horrifies Ulrich, but he still begrudgingly goes along with her decision without any argument. Although Yumi was the one to call this choice in their relationship, it soon becomes obvious that she as well doesn't like it. Despite this decision on both parts, it becomes clear that they still have strong feelings for each other. It is implied in the Code Lyoko season 4 finale, Echoes, that they're eventually re-exploring the romantic part of their relationship again.

In Code Lyoko Evolution, one year after the season 4 finale, it seems as though Ulrich and Yumi have gone back to their "just good friends" status in the beginning of the season. (Although Ulrich tries to confess his love for her on multiple occasions, and has apparently given up.) But as the plot thickens, their romantic relationship, or at least their romantic attraction to each other becomes more and more apparent. She even goes as far as to (indirectly) call him her "soul mate" through an English story assignment when basing a main male character (who is the love interest of the female character) on him in the episode Intrusion. Also in the ending of the episode, Yumi and Ulrich finally admit how much they care for each other and seemingly reconcile their blossoming romance. Later in the episode, Massacre, when Aelita asks Yumi how her relationship with Ulrich is going, Yumi admits that things are going much better since he has become more "considerate" towards her feelings, argued less with William and has become more mature than he's been in the past, making her happy.

He and Yumi are instant friends upon his arrival at Kadic, much to the jealousy of Ulrich. William can clearly be seen developing a crush on her during their continued encounters and soon develops feelings for her. His romantic feelings are obvious and he does not bother to hide them to anyone, including Yumi herself, being the polar opposite of how Ulrich handles his feelings towards her. Despite William's blunt crush on her, Yumi often insists they are friends and nothing more. Though from time to time, it is apparent that she has, in the least, a small attraction to him as well. She has even used this attraction to free him from X.A.N.A., at least temporarily, in season 4. However, the small romantic attraction is never ventured than just so, with Yumi admitting William isn't really her type, and is just categorized as Ulrich being pointlessly jealous.

The relationship between Jeremie and Yumi can be compared to that of siblings as she often treats him such. Even though Yumi cares about Jeremie a lot, she gets easily angry if she is convinced that Jeremie has made an mistake that affects herself or others health. Jeremie also trusts Yumi more than he does with Ulrich, Odd or William, mostly because of her being slightly smarter than other three, trusting his first virtualization to her hands.

Despite often getting on her nerves, Odd can be considered a good friend to her. He often teases her and Ulrich about their obvious romantic attraction, much to her and Ulrich's annoyance. Although on occasion, he has pushed the two together, knowing of their repressed attraction, and often urging Ulrich to admit his feelings for her and is disdained when his attempts fail. In the fourth season, he even openly tells the two that while they try to insist to everyone that they are only friends, no one buys it.

Aelita is Yumi's only good/best female friend and companion as she doesn't spend much of her time among the other girls at Kadic, despite obviously getting along just fine with them, and simply prefers spending her time with boys. She and Aelita can be seen to be rather close and sometimes can compare to that of two sisters.

Education and the Lyoko Warriors:

She is the only one of the group living off-campus, the others being dormitory residents. Socially, her relationships do not seem to preoccupy her much, she seems to pay real attention only to her inner group of friends. While some schoolmates admire her when others despise her, she pays no attention rather focusing her attention only on her group of friends. She is shown to be very popular among boys who are interested in her, enticed by her natural and cryptic beauty. Yumi, however, often kindly rejects any attempt on their part.

Yumi is undoubtedly the most mature and the most thoughtful of the group. Naturally warranting respect, her opinion is always taken into account. She always acts within the group as defending others: it is she who makes important decisions on the group's direction, and it is to her that they come for advice. 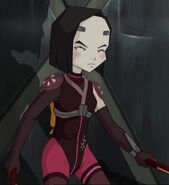