Wolverine, real name James Howlett, but more often known as Logan, is a character from Marvel Comics. He previously fought Raiden in the 52nd episode of Death Battle, Wolverine VS Raiden. He also fought Raphael of the Teenage Mutant Ninja Turtles in the 23rd episode of DBX and has later returned in the 62nd episode to fight against 100 Barakas from Mortal Kombat. He later fought against Black Panther in One Minute Melee.

Born in the 1800s, Wolverine's past throughout his 100+ year life has been filled with love, misery, and death. Having been experimented on by the Weapon X program, which coated his bones in adamantium and nearly erased all of his memories, Wolverine has spent years trying to piece it all together.

After fighting the Hulk, Wolverine decided to join the X-Men, where he battled for the dream that humans and mutants could co-exist in peace. 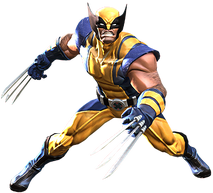 Wolverine with his claws out

Wolverine as he appears in the retro comics 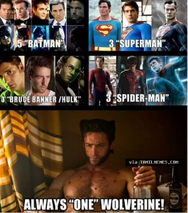 Unlike most heroes, there's only one Wolverine. Take that, Superman! 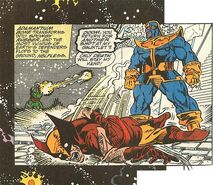 Wolverine being turned into rubber by Thanos. 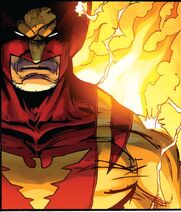 Add a photo to this gallery

Retrieved from "https://deathbattlefanon.fandom.com/wiki/Wolverine?oldid=1315542"
Community content is available under CC-BY-SA unless otherwise noted.