Don't mind my full username, please. I hate it. Just calling me Wither shall suffice. I am a bureaucrat on this wiki; to be wholly specific, a Deputy Head Bureaucrat, alongside Commander Ghost. The two of us are pretty much "second in commands" of this wiki only to Big himself, and we both supervise and mentor the moderators of this wiki.

Ghost is the Junior Supervisor and hence took in the Chat and Discussions Mods; I am the Senior Supervisor and as a result, have all Content Mods and General Moderators (== Chat + Content + Discussions) under my wing; in addition to that, I am also the owner of the current incarnation of the DBF's Public Discord. I am always available for you to contact about anything you'd like, although you must also remember that my message wall is not a plugging ground and doesn't scream "memelord arena". I am also the head bureaucrat of the DBX Fanon Wiki, a sister site of the Death Battle Fanon Wiki; and I lead the One Minute Melee Fanon Wiki together with my co-head bureaucrat MP999.

I started editing wikis on July 11, 2013 (Although I only created my current Fandom account on February 10, 2014. My previous accounts are lost to time), and joined the Death Battle Fanon Wiki on January 23, 2016. I became staff two years later in 2018. While I do plan to try to make my own Death Battles, I don't often make much progress on them, and most of my time here is spent cleaning up and organizing the wiki, dealing with rule violations and troublemakers, and maintaining templates and other technical features (+ the design).

Now, with the boring shenanigans out of the way, I believe it is time to introduce myself as a person, right?

My real name is not of relevance to any of you, but it's not an English one so I can imagine many users finding it bizarre upon first sighting. I am from the Kingdom of Belgium, a multi-ethnic and multicultural nation in Western Europe that no one seems to be able to pinpoint on any given map. Hold on, lemme do that for you: It's crammed between France, the Netherlands, Germany and Luxembourg, and furthermore opposite the United Kingdom from which it is seperated by the English Channel. If you want to get more specific, I live in the State of Flanders, so my native language is Dutch (not French. I often get triggered when people falsely think / claim all Belgium speaks French only, which has its reasons in historical oppression of my people by the Francophone Walloons; but let's not get too deep into that). If you want to get even more specific, then 1) you're creepy, and 2) I live in the Province of West Flanders, and that's as far as I'm going.

I am male, asexual, and finromantic. What does all that mean? Well, trust me, I could've made it even more complicated by confirming that I am aphotisexual (nani?), but here goes: I do not experience any sexual attraction or desire towards sex (Asexual), I am disgusted and repulsed by the idea of ever having sex (Aphotisexual) but still fall in love with girls and others who are feminine in nature [FIN] (Finromantic). Sexuality and romanticism are two wholly different things, just for the heads-up. Furthermore, I am fully atheist — I do not and will not ever believe in God or literally anything like it. No, I am not unsure about it (That's agnosticism), I am fully confident that there is no God, no force, nothing except pure science. I have absolutely zero issues with those who do believe in a God, but this is how I think about it.

I am generally considered as a friendly, welcoming, helpful and fun-loving individual both in real life and on the internet, but can still be damn serious if the situation requires so. That said, I am not without my flaws. I am also considered to be stubborn and impatient.

I have both autism and dispraxia and couldn't be more proud of that.

Lastly, I am white, have blue eyes, and very dark brown hair. I prefer to have it reasonably long (== not ultra-short), but not to the point of having a ponytail or stuff like that. I also wear glasses.

I'm a gamer and computer nerd at heart. Always have been, always will be. I'm so interested in them both that I desire to make it my profession — I hope to, one day, become a professional videogame developer and software programmer. Starting a gaming company and software business of my own is my absolute biggest dream. To this end, I have been studying both Economy and IT. I am largely uninterested in web development (== HTML, CSS, JavaScript, PHP, SQL), networking, databases, artificial intelligence, algorithms, IoT and computational and statistical science. Instead, I far prefer digging my head into desktop application development, mobile development, game development and modding, systems programming (== programming firmware, drivers, computer periphals and their interaction with the computer, bootloaders etc), server-side programming, ROM hacking (This is not actual hacking, rather it involves reverse-engineering and modifying games, usually older ones. Think of making Sonic ROM hacks, or a ROM hack of Super Mario World) and cloud computing.

Oddly enough, despite being good for beginners and frequent usage in basic games, I absolutely hate Python with a burning passion and couldn't care any less about sucking in it. Go, Rust and C++ aren't really my cup of tea either, in total spite of their popularity (Although I'll certainly need the latter to get a gamedev job, unfortunately). Languages I'd much rather learn — trust me, there's many — include: C#, D, Haxe, Lua, Julia, Pascal, Ada, F#, Perl (Unironically) and its spinoff Raku, Java, Swift, Nim, Scala, Kotlin, Dart, Lisp, C, Objective-C, Visual Basic.NET, Ruby and even Assembly language.

Other interests of mine include movies, TV series, cartoons, history, geography, music and comics. For more details, see Likes/Dislikes below.

My Death Battles are made completely out of order. I just work on whatever fight interests me the most, whenever I feel like it — that's it. No structure.

Slenderman VS The Tall Man (Slenderverse VS Phantasm) [COMPLETED] 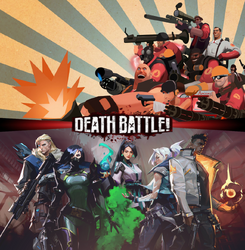 Chara VS HABIT (Undertale VS EverymanHYBRID)

Garfield VS Gumball Watterson (Garfield VS The Amazing World of Gumball)

Yandere-Chan VS The Postal Dude (Yandere Simulator VS Postal)

Wario VS Shadow (Super Mario VS Sonic the Hedgehog)

Rosy the Rascal VS Harley Quinn (Archie Sonic the Hedgehog VS DC Comics) — NOTE: Thumbnail will be remade soon, I know the current one sucks. It's old.

Wheatley VS Claptrap (Portal VS Borderlands) — NOTE: Same here, thumbnail wise. Also, I'm on the verge of dropping this, ngl.

The Observer VS Ghostface (Scream VS The Slenderverse), with EnnardTrap1987 [COMPLETED]

Mephiles VS Marx (Sonic the Hedgehog VS Kirby), with Raiando and The Eldritch Snowcone [COMPLETED]

The Simpsons VS The Wattersons (... VS The Amazing World of Gumball), with Skyblazero

Day VS Betty Noire (The Legend of Dark Witch VS Glitchtale), with Zinniax-13

Characters I plan to use in Death Battle

This is basically where I list my friends on this wiki plus everyone that I consider a friend.

Don't take it as an offense if you're not on here; simply remind me and I'll add you. ;)

(This is stuff I haven't experienced yet, but that I soon will. Series on my watchlist, and games in my library or wishlist that I have yet to try or purchase)