I like memes dead or alive except for baby shark and minions.

Also I'll make ya a Death Battle Score/OST if ya need one. (Note: They aren't the best but they're honest work) 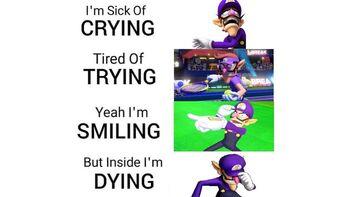 Role(s) on the wiki:

Full-Time Admin (1/25/21 - 5/26/21) Reason (for becoming and getting removed or however you want to say it): Did good at being Emergency/Temporary admin, and left due to having to leave for Summer. (Don't worry, I'll be back eventually)

Hi, my user name is HyperSsonic (made long ago due to favorite form of Sonic which was Hyper Sonic and favorite YouTuber at the Ssundee (still one of favorites), so made it HyperSsonic), or you could just call me Hyper or Sonic (or with extra s to make it Ssonic) or whatever Idc (but I do prefer Hyper). I am a male, who writes Death Battles for fun and also will make memes. Also my pfp pic is Soviet Shrek, because why not? It also switches to Hyper Sonic.

Some of my favorite games are Undertale/Deltarune, WWE 2k, UFC, Sonic the Hedgehog, Lego City Undercover, and Minecraft. Some of my favorite movies are Shrek, Sonic, Ace Ventura, and Bee Movie. Some of my favorite songs are Way Past Flash, Megalovania, All Star (Soviet Edition), We are Number One, Drawn to Chaos, An Enigmatic Encounter, Remember the Name (Fort Minor), Pumped Up Kicks, Unscriped Violence, Broken Dreams, I Am... All of Me, Chaos Unraveled, The Speed In My Soul, One-Winged Angel (Advent Children),Judas, Porky's Pokies (Smash remix), DbD Sonic.EXE Lobby and Chase theme (fanmade, duh), and Burn It To The Ground (Nickelback). Some of my favorite memes are Robbie Rotten, and Uganda Knuckles. My Favorite Sport is Boxing/MMA. Random things are that I have no idea how to make tabbers or things with my name look normal (like other links), wants Doom Slayer (DOOM), Shadow (Sonic the Hedgehog), and Heavy (TF2) to be in Super Smash Bros.

My name is not im-fookin-portant for y'all to know. I am also a Christian (specifically Lutheran)... HALLELUJAH! I also live in Texas, YEE HAW!

Both IRL and on internet, I am a nice dude who loves to meme around (My Message Wall DOES say Memelord Area, so please, don't get scared to send a meme onto my message wall. I am Le Meme Lord, so please send some memes, I am here to write Death Battles, and rate memes.), Though, I ain't without a flaw or two, I can easily get angered if I am aggravated (it is rare, but it can easily happen, and I ain't sure you wanna mess with a guy who does boxing in his free time), and if I gotta be serious, trust me... I can easily be serious if I truly NEED to be (rest of the time I am just a joke). I also have a somewhat speech impediment (I ain't afraid to admit it), but eh, I speak good enough for ya to understand me.

(Will add more later on)

Herobrine VS Sonic.EXE VS ERROR!Sans  (Completed)

Bonus Death Battles while I work on current one or are just extra ones that I decided to do because I was bored:

The Joker VS Jon Moxley  (Completed)

Trevor Philips VS The Scout  (Completed) (I consider this battle a part of Season 1 AND a bonus, but more of a bonus)

GeoExe VS Undyne (Did Undyne bio, 2nd half of fight, and results)

If I ever get good at making 3d models, I will make a DK with Sephiroth's clothes, sword, and hair and if I get good at animating, ill make a circle of A-posing DK's spinning around SephirKong with the chorus playing in the background - Y3p owo (in chat)

I'M A CHOCOLATE MILKAHOLIC!!! - Me (every single day)

I'm just going to end up looping around in circles getting all confused on how this would work. Then again that might be because I'm looking way too deep into fictional fight between a WWE wrestler and an anime dating sim high school girl. - MaverickHunterSilver (in comment section of Matt Hardy VS Monika)

The meme isn’t wrong, nothing can beat having a plot that is barely plot and is just stuffed with memes. -Kirbysakurai (Talking about meme I made about The Chat Wars VS DBFCU)

It seems as if this is up for adoption.... Hippity hoppity, this is now my fuckin property. -Me (Whenever I adopt a fight)

"Jimmy, you aren't supposed to be drunk at work!" "cHrIp, YoU fUcKeR!" -TheGreatDimentio! (making a cricket drunk in chat.)

Song went from "It's nice to finally meet you sir" to "She calls me daddy too." -Zomby Jano (In the comments of Earthbound - 158 - Pokey Means Business!)

RYUKO!!! NUI!!!! HANG ON TO YOUR ASSESS AND HAVE FUN WITH THAT TOY STORY BECAUSE THE NATURE BOY WILL BE COMING YOUR WAY AND TO DRILL BOTH OF YOU!!!! WOOOOOOOOOOOOOOOOOOOOOOOOOOO!!!!!! -Anonymous #4879030 (on a certain site that I won't say)

I call myself Diablo the Cheater. As far as I know, I'm the only person who writes a list of cheating cheats and uses it in-game. My mod turned the game into an interdimensional sex simulator (powered by a fucking necromancer), and I use that game on a daily basis. To date, I've cheated in thirty games. Twenty-one of them were developed by other users, and the other two were made by me.

And today, this motherfucker is named after me.

I use a relatively simple cheat to game console games. What I do is turn the switch on the controller I use into a button on the console, and then I press it to trigger cheats that give me a better experience. Here's what those che. -DougDoug in this video

This man is trying to speed run dementia like he’s playing “Everywhere At The End Of Time” at 20x speed! -Bumbles McFumbles talking about Gabby Jay in this video

Note: Even though I know a lot of people on the wiki, these are people I do consider friend. Now, don't be sad if you ain't here, maybe one day you will be here.