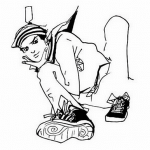 check out my stuff i guess

wow it's my stuff i guess

a lot of people go from chronological order but to make sure that you check out the stuff that's actually good from me and don't read the terrible monstrosity of the Haohmaru vs Jago page I made in 2015 as a mere 14-year-old, you can thank me later

i learned that seasons suck and i can't stick to a schedule, so i decided to not have sequels at all ever again. they're just pages now.

this was still written in 2015 but it isn't total garbage

woah there champ, let me just give you a heads up. these six fights i'm about to show you are just abominable and i hate them with every inch of my passion. not an example of good writing, but if you really wanna look i cant stop you

Retrieved from "https://deathbattlefanon.fandom.com/wiki/User:Arigarmy?oldid=1297429"
Community content is available under CC-BY-SA unless otherwise noted.