Trunks is a character from Dragon Ball Z media franchise and the son of Vegeta. He fought Silver the Hedgehog twice, in both an episode of One Minute Melee and DBX. He later returned to DBX where he fought against Link from The Legend of Zelda series.

Born in a dystopian future to Bulma and Vegeta who died when he was still a kid. Trunks is well-mannered, serious and very cautious, he hails from an alternate timeline in which Android 17 and Android 18 murdered the Z-Fighters (Piccolo, Vegeta, Tien, and Piccolo) and proceeded to create apocalyptic hell on Earth. Trunks was trained by Future Gohan as a teenager and became a gifted fighter, swordsman and a Super Saiyan before his master died in a fight with the androids.

Enraged, he fought the androids again, and after another close escape at Bridgetown, Future Bulma reveals her Time Machine to her son, which she hopes he will use to return to the past and save Goku, hopefully altering the future. Unfortunately, the changes he did in the past didn't affect his future (It affected only the timeline we know), but he got the power to easily outclass the androids and the Bio-Android Cell. He also got trained by Shin and Kibito to beat Dabura and Babidi, to prevent the birth of Majin Buu, the thing that made him get the Super Saiyan 2. Ten years passed and he was training every day until the arrival of Black Goku. Being the only capable of protecting the future, he fought with that guy and lost.

Wanting to protect the humans more than anything, he became part of the resistance and teamed up with the remaining humans to fight Black. His mother made a plan, to go back to the past again and ask for help to Goku and the others. His mother died in sacrifice to let Trunks escape, and he got to travel through time again thanks to that. After a few battles (In companion with Goku and Vegeta) with Black, the Goku's doppelganger revealed his real identity as Zamasu, that he's from an alternate reality and that he's teamed with Future Zamasu. Vegeta, Goku and Trunks did their best but they weren't able to beat. Then, Zamasu calls Trunks a sinner and, with Black, blame him for everything. Consumed by his anger, Future Trunks stand back up and takes on a completely new form never seen before, shocking everyone. As he slowly walks towards Black with an enraged expression, Future Trunks loudly exclaims that he will kill Black. He was stronger than Black and Zamasu, giving Goku and Vegeta the time to escape to past again.

When they came to the future again, they fought the evil Kais and Trunks almost sealed Zamasu, but the jar broke, forcing the Zamasus to fuse into Merged Zamasu. To fight back, Goku and Vegeta fused into Vegito and nearly killed the god, but the fusion got separated. Everything seemed lost, but Trunks took the energy of the remaining life of the earth and fought Merged Zamasu, cutting him in half using a Spirit Bomb-like sword and defeating him. But the immortal part of Merged Zamasu was still alive and tried to fuse with the universe's energy, and at that moment Goku called future Zen-Oh, who destroyed the entire universe. Trunks went to the past with the others and then with Mai to another future where Black and Zamasu didn't come yet. Actually, he lives in that future in companion of other Trunks and two Mais. 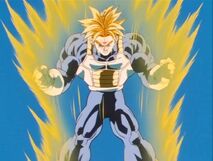 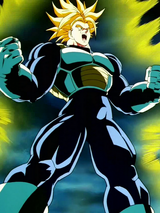 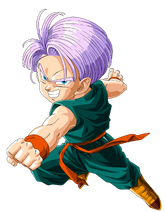 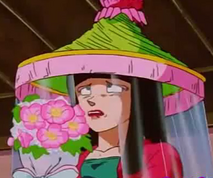 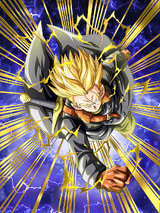 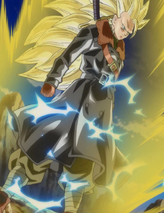 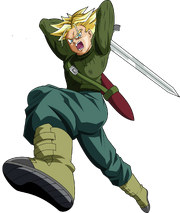 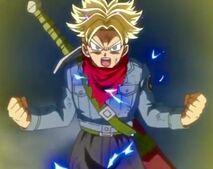 then slays Merged Zamasu with it.