Galen Marek otherwise Known as Starkiller, is the main protagonist of the video game series, Star Wars: The Force Unleashed. 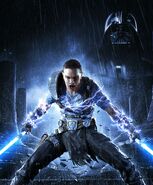 Starkiller, the unstable clone of Galen Marek
Add a photo to this gallery
Retrieved from "https://deathbattlefanon.fandom.com/wiki/Starkiller?oldid=1191614"
Community content is available under CC-BY-SA unless otherwise noted.