Sonic the Hedgehog is the titular protagonist of the video game franchise of the same name. He previously fought Mario in the 13th episode of DEATH BATTLE!, Mario VS Sonic (2011) and the 100th episode, Mario VS Sonic (2018). The Archie Comics Sonic fought Wally West in the 132nd episode, Flash VS Sonic. He also fought Mario, Barry Allen and Goku in episodes of One Minute Melee. He also raced Mario, Captain Falcon, a Scout Trooper, Doc Brown and Takumi Fujiwara in an episode of Death Race.

As Sonic (Sonic the Comic/Fleetway Comics)

With the Freedom Fighters

With Shadow and Silver

With Tails and Knuckles

When he was born, Sonic was a baby Prince who one day would rule Mobius along with his siblings Sonia and Manic, but Dr. Robotnik caused his mother to separate him, siblings and his mother from each other.

Sonic The Hedgehog as he appears in Archie's Sonic Comic Series 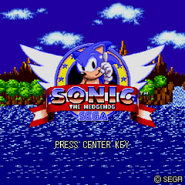 Sonic as he appears in Lego Dimensions. Wait, what? 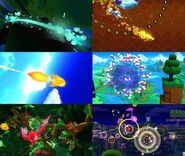 Some Color Powers of Sonic