Simon Belmont is the main protagonist of the video game series, Castlevania.

When he was only 22 years old, Simon Belmont would be allowed the opportunity to prove himself to see whatever or not he's worthy for the Belmont Legacy as others have before. On the 100th year on Easter Day after being defeated by Christopher Belmont, Dracula has been resurrected by a unholy cult to bring about a era of darkness during a dark mass in an abandoned monastery.

It was then that Simon Belmont took up the Vampire Killer with the intent to end Dracula's reign of terror, fought his minions alone and eventually the Prince of Darkness himself like his ancestors before him.

Seven years later, the curse inflicted on him started to slowly ravage against his body. Realizing that death is near, he traveled to his family's cemetery to contemplate his situation.

It was then a woman of mysterious origin appeared behind Simon Belmont in the morning mist, she then mentioned that the ravaging feeling he had was a curse bestowed to him from Dracula and his life was in danger. She also mentioned that in order for him to break free from Dracula's curse, he would have to travel all over Transylvanian to collect his organs to resurrect Dracula and destroy him again. The mysterious woman disappeared just as sudden as she appeared.

Despite the curse slowly raving his body, Simon Belmont then took up the quest he was given and decided to find the body parts of Dracula himself. The moment he did so was the moment that the land itself became infested with creatures of the night as they would roam around the towns at night.

Some of the townsfolk where grateful for Simon Belmont offering him proper information in order to aid him on his quest on where to go next, other townsfolk helped him for just money as well as items in exchange for their goods and some townsfolk still remained fearful about Dracula's return would happen early if Simon Belmont where to succeed in his quest thus providing him with either misinformation or utterly refuse to help him outright.

In sprite of all odds as the curse began to take its toll, Simon Belmont managed to successfully gather all of Dracula's remains that where gathered by his servants in there respectful strongholds in various mansions throughout the land itself. He then returned to what appears to be the ruins of Dracula's Castle which was deserted by both humans, animals and even monsters alike.

Knowing full well that Transylvania will be plagued with darkness and ruin should he fail, Simon Belmont placed the remains in a specific room within the ruins of Dracula's Castle. Upon adding the 6th and final piece which is the fang, Dracula was resurrected once again for he and Simon Belmont engaged in another epic battle, it is then that Simon Belmont manages to successfully defeat Dracula a 2nd time thus breaking the very curse that plagued Simon Belmont for years.

Within the country of Transylvania speaks about a legend that once every 100 years, the Forces of Good gradually become weak under mysterious circumstances as the Forces of Evil become stronger. It is then that such Force of Evil manages to manifests into one of the most feared individuals to walk the earth itself... Count Dracula himself as he's been known to become resurrected at one point to another, as the local residents fear that he may become unstoppable if ever allowed.

Despite this, the Belmont Family ensures that Dracula is defeated and have succeeded in vanquishing the Prince of Darkness himself from one point to another. They have passed on the secrets and skills of vanquishing The Creatures of The Night to the oldest child within the Belmont Family. While it's safe to say that many of the Belmonts have lived peaceful lives to the point where they didn't experience a single encounter with Dracula himself didn't mean they where unprepared should they ever encounter him, due to the fact that some of the more peaceful Belmonts did have run-ins with a number of the lesser Creatures of The Night and always emerged victorious.

It has been over 100 years since the last battle between Dracula and the Belmont Family. As Spring approaches to the point where they will celebrate another Easter Day, the local townsfolk of Transylvania report odd sightings of various creatures as they appear under the veil of the night itself. It is then where a group of cultist in an old destroyed abbey somewhere outside of town perform an ancient yet vile rite that is used to resurrect The Prince of Darkness once again.

A thundercloud hovers over the graveyard where Count Dracula is buried, where the roar of thunder can be heard from a distance. A bolt of lightning strikes Dracula's Tomestone thus utterly destroying most of the very same tombstone and defiling the very blessing that otherwise prevented Dracula from being resurrected. Realizing that Dracula had been resurrected for a third time, Simon Belmont then grabs The Vampire Killer among with his equipment and sets forth to put another end to Dracula himself, or at least until he ends up coming back again for another hundred years. 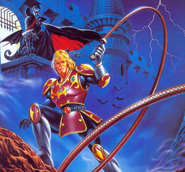 Simon Belmont against The Creatures of The Night

Simon Belmont as seen on the front cover of Nintendo Power

Retrieved from "https://deathbattlefanon.fandom.com/wiki/Simon_Belmont?oldid=1303412"
Community content is available under CC-BY-SA unless otherwise noted.