Sean Illusu is one of the main protagonists of Monstrous, a written and hopefull animated series by Necromercer. 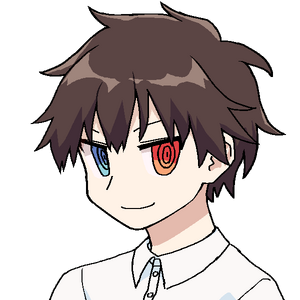 Born with a split personality, Sean Illusu's life was dictated by his current mental state, which fluctuated on a nearly daily basis. Because of this, he could barely function in society, and he rarely interacted with people outside of his family. When Sean was around twenty-three years old, his Father was killed in a car accident. While attending the funeral, Sean's family was killed and eaten by a Black Shuck, a European monster which is often considered an Omen of death. Sean's father saw it just before he died, and it came back to eat the grief of his family. (I redid what this monster does. Now it picks a target to feed off of, and once it kills one of them, it finishes the rest off after making them give into despair and fear.) After fighting his way through illusions which the beast cast, illusions which cost his brother, sister and mother their lives, Sean found the Shuck, which attacked him. Sean ripped it's eye out while struggling with it, and this killed it. Sean was fatally injured, but tethered with the beast after killing it.

Tethering is a process of immortality used by monsters, which allows them to fuse their souls with their killer. Sean woke up in a hospital, with all of his wounds healed. His left eye, which was originally blue, was now blood red. He had the Shuck talking to him in his head, trying to take control of him. But his other personality beat it back, and after a long mentl battle, Sean and his alternate personality were victorious.

After Sean left the hospital, he met a girl named Vicky Hendricks. Their situations were similar,so the two became friends, and after a while of traveling together, were found by the Graveyard Shift, which at the Time consisted of Felix Chilling, Lexington Valentine, and James Wolfe. Sean and Vicky decided to travel with them, and they quickly got into a conflict with a vampire.