Scarecrow, real name Dr. Jonathan Crane, is a villain from DC Comics and an enemy of Batman.

WARNING: The following tab will reveal the number of wins and losses for the following character. Read at your own risk.

The son of chemist Gerald Crane, Jonathan Crane was born out of wedlock and was left to be raised under the abusive care of his maternal great-grandmother Mary Keeny, a religious fanatic who made him wear a scarecrow outfit to be attacked by crows. This not only gives Crane a fear of Mary Keeny. but also nightmares of animated scarecrow monsters creeping near him. Through both these fears and being bullied in his high school years, Crane became obsessed in phobias and decided to unlock the mysteries by attending Gotham University to study psychology and biochemistry. Though kicked out for conducting experiments on human subjects, Crane found an abundant amount of patients when he became a psychologist in Arkham Asylum while adopting the identity of the Scarecrow and became one of Batman's greatest enemies.

Scarecrow in the Batman: Arkham series

Scarecrow in the Batman: Animated Series 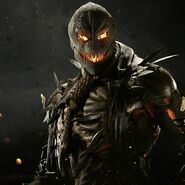 Scarecrow as a Yellow Lantern

Scarecrow in the Dark Knight Trilogy

The Scarebeast
Community content is available under CC-BY-SA unless otherwise noted.
Advertisement