Saitama, the One Punch Man

Saitama is a human from Z-City who, through "rigorous" training, broke his human limiters and achieved unrivalled levels of strength and speed. Never breaking a sweat, the name One Punch Man is fitting a name for the series. Never going beyond a simple brawl, his sheer Strength, Speed and Power have effortlessly destroyed anyone in his way. Due to his effortless wins through the series, we have yet to see his true, full capabilities; getting slightly more "serious" as the series progresses, he casually puts down any new enemy on his radar.

Normal Series - Because most opponents that Saitama comes across can't even lay a scratch on him, he doesn't normally play seriously when combatting a foe.

Serious Series - These attacks use a portion of Saitama's true power.

Saitama in Shingeki No Kyojin 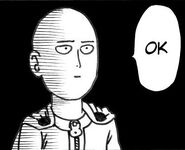 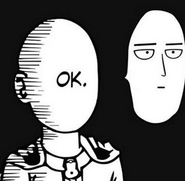