Quicksilver is a character from Marvel Comics. He previously fought The Flash in the 61st episode of Death Battle, The Flash VS Quicksilver.

with the scarlet witch

Quicksilver and Scarlet Witch VS The Wonder Twins (Completed)

Pietro Maximoff and his twin sister, Wanda Maximoff, were born at the Wundagore base of the High Evolutionary. They were the children of Romani couple Django and Marya Maximoff. The High Evolutionary supposedly abducted the twins when they were babies and experimented on them, once he was disgusted with the results, he returned them to Wundagore, disguised as regular mutants.

They were eventually taken in by the mutant terrorist Magneto (who was believed to be their true father for a while), were given the names Quicksilver and Scarlet Witch, and wreaked havoc with the Brotherhood of Evil Mutants. Eventually, they quit the team and sought to redeem themselves by joining the Avengers. They joined at the same time Hawkeye did under the leadership of Captain America and the four were nicknamed "Cap's Kooky Quartet." 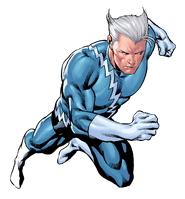