View source
watch 02:56
Raise a Floppa - The Loop
Do you like this video?
Play Sound

Qrow Branwen is a character from the Rooster Teeth web series, RWBY. He is the uncle of Ruby Rose and Yang Xiao Long and is the younger twin brother of Raven Branwen.

Younger twin brother of Raven Branwen, Qrow and his sister entered Beacon Academy and formed team STRQ with Summer Rose and Taiyang Xiao Long. As a professional huntsman and combat teacher, he spent his later years fighting Grimm, drinking, investigating for Professor Ozpin and looking out for his nieces, Ruby and Yang. He often puts on a playful and mischievous demeanor, but fights with the skill of a veteran swordsman. He cares for his loved ones, but chooses to distance himself from them in fear that his semblance could hurt them. 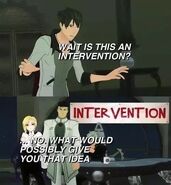 Qrow in his Volume 7- Atlas outfit
Community content is available under CC-BY-SA unless otherwise noted.
Advertisement