Nonon Jakuzure is a character from the anime series, Kill La Kill.

Out of Honnouji Academy's Elite Four, Nonon has known Satsuki Kiryuin the longest since kindergarten and understands her friend's way of thinking. After graduating from middle school, Nonon enrolled with Satsuki at Honnoji Academy where she serves in the student council as regulator of the school's non-athletic groups, mostly likely captain of the school's marching band.

Like the other members of the Elite Four, Nonon possesses a three-star Goku Uniform. Nonon's Goku Uniform is Symphony Regalia which utilizes sound wave attacks, normally in its weakened Grave tank and Presto aircraft vehicle modes until Nonon gets serious and enters her Da Capo mode with her band hat now doubles as sonic cannon that resonates with the targeted Life Fibers of her opponent to manipulate/damage. She later receives Symphony Regalia Mk.II, which condenses elements of her previous uniform with traits of a flight suit with an elaborate jet pack. During the final battle against Ragyo, Nonon gains the Goku Uniform Symphony Regalia: Finale, which is skimpier than her last two uniforms but uses more powerful and concentrated sound waves in her attacks. 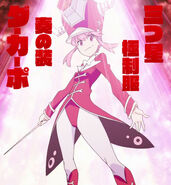