Monkey D. Luffy is the main protagonist from the anime/manga series, One Piece, and is on a quest to become King of the Pirates. He previously fought Naruto Uzumaki in an episode of One Minute Melee. He had also fought against Mister Fantastic from Marvel Comics in a episode of DBX.

Inspired by his hero Shanks, a young Luffy desired to become not just a pirate, but the King of the Pirates, by finding the "One Piece". His dreams were set back when he ate the Gum-Gum Fruit, a Devil Fruit that granted him the power of being able to stretch his body like rubber at the cost of not being able to swim. After his hero Shanks sacrificed his arm to save Luffy from a Sea King, Luffy understood the harsh reality of being a pirate, and waited until he was 17 to set off. He gained his iconic Straw Hat from Shanks and promised to return it to him when they met again.

Over the course of his adventure, Luffy's crew gradually grew to a small, but powerful force. He has stopped criminal organizations, civil wars, coups, and even went as far as to declare war on the World Government in retaliation for the attempted blackmail of one of his crew members. He even participated in the War of the Best to save his brother Ace from execution. He defeated countless pirates, government agents, rebels, and even a man with the strength of a god, before he finally met his match. In an attempt to become stronger, his crew separated and went into hiding for two years, increasing their strengths exponentially.

Recently, after allying himself with the Warlord Trafalgar Law, Luffy defeated the Warlord Don Quixote Doflamingo, one of history's most powerful pirates, and a World Noble. This has made him even more of a target for the Marines, who have increased his bounty to 500 Million Berries, but also gained him many more allies. In addition to his Straw Hat crew and its nine members, and his alliance with the Heart Pirates crew, Luffy commands the Straw Hat Grand Fleet, an organization of 5,640 powerful members that will answer his call. In addition, he has gained the allegiance of several kingdoms such as the Cherry Blossom Kingdom, the Alabasta Kingdom, the Dressrosa Kingdom, and the Provence Kingdom.

Luffy is also the adoptive brothers of Portgas D. Ace and Sabo.

Soru(Shave): By kicking the ground at least 10 times, all in the blink of an eye, Luffy propels himself across a short distance at an FTE speed. Unlocked by Luffy with Second Gear.

Geppo: Luffy can kick the air itself to propel himself through the sky as if he was flying. This is only possible with Fourth Gear.

Turns Luffy's body into rubber. At the cost of being able to swim, Luffy can stretch all parts of his body to extreme lengths, and gains immunity to blunt attacks or bullets. The fruit is a Paramecia type, not a Logia type. This means that while Luffy is unable to produce more rubber from his body, or control nearby rubber, the changes on his body are permanent and always active. Luffy has a wide range of attacks making use of his rubber body; a few notable ones are listed below.

Note: Use either "Gum Gum" or "Gomu Gomu no"

Luffy is capable of altering his internal organs and structures, all of which are rubber, to achieve some amazing feats with his body. All of his gear techniques can be used simultaneously, I.e. he can use Gears 2 and 3 at the same time for a boost in speed and strength. 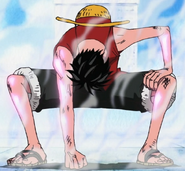 Luffy's Red Hawk, a tribute to his older brother Ace 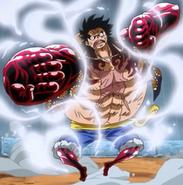 Luffy using Conqueror's Haki
Add a photo to this gallery

Retrieved from "https://deathbattlefanon.fandom.com/wiki/Monkey_D._Luffy?oldid=1452291"
Community content is available under CC-BY-SA unless otherwise noted.