View source
watch 03:01
Wiki Targeted (Games)
Do you like this video?
Play Sound

Maka Albarn is a character from the Japanese anime/manga series, Soul Eater. She is the meister of Soul "Eater" Evans.

An EAT-class Death Meister, Maka is a tough girl despite appearances, both spiritually and physically. In fact, she is able to sense of the souls of others, able to tell if they are human or not and gives her an edge in sensing enemies. She possesses a rare Soul Wave-Length known as an Anti-Magic Wavelength that can repel evil and resistant against magic and madness-inducing attacks. It enables Maka to have an edge against fell-creatures and evil magic users, Immortals included. She can momentarily spread this to another upon touch, like Soul, to make them share her immunity. After Soul became a Deathscythe, Maka's soul is revealed to a Grigori-type, allowing her to access the full potential of her partner's power. After mastering the Black Blood in Soul's body, Maka originally manifest a battle dress made of Black Blood before it transformed into a white Girgori version during her battle against Asura.

While Maka normally uses Soul as a weapon, she is able to fight her own battles and can channel her bravery into a single punch. As one of her last resorts, Maka can will herself into an unconscious state of being to manifest her father's lineage to momentarily create many scythe blades from her body.

Maka's weapon partner who can assume the form of a scythe, actively aiding her in a fight with his own insights. Through their Soul Resonance, which increases Maka's power and speed, Soul enables her to use her trademark Witch Hunter attack. In time, due to Soul being infected with Black Blood that momentary flows through, Maka learned the evil-killing ability Genie Hunter and gains a Black Blood Dress that makes her almost invulnerable to physical attacks with most blows absorbed. 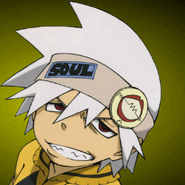