Majin Buu is a character from the anime series, Dragon Ball Z. He previously fought Kirby in the 40th episode of DEATH BATTLE!, Kirby VS Majin Buu.

A very, very long time ago since the dawn of time, a pink monstrosity known as Majin Buu existed to destroy, until he was trapped in a Sealed Ball. However he was discovered by the evil wizard, Bibidi in order to destroy the universe. After destroying a couple of planets, Bibidi went out to earth. But before he got there, he unfortunately died but made a clone of himself called Babidi to complete Bibidi's goal. Until Majin Buu turned out to be a complete lunatic, which slightly upset Babidi and Dabura. But after being friends with a guy named Hercule Satan, Buu became good and started helping the Z Fighters. 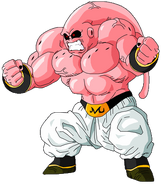