Luke Cage, also known as Power-Man, is a superhero and vigilante from Marvel Comics.

Born to pastor James Lucas and raised in New York City's Harlem neighborhood, Carl Lucas spent his youth in a gang called the Rivals before attempting to fly straight for his family by becoming a cop in his grandfather's hometown in Savanah, Georgia where he. But his best friend Willis Stryker, later revealed to be his paternal half-brother, set him up for drug handling and is sent to Seagate Prison. Meeting Reva Connors, Carl underwent an experiment by Dr. Noah Burstein after he was nearly killed by the crooked prison guard Albert Rackham. The result gave Carl superhuman strength and a seemingly unbreakable skin. After he escaped from Seagate in midst of the chaos, he changed his name to Luke Cage and moved to New York City where he tries to make ends meet with Reva. But after Reva is killed, Luke establishes a Heroes for Hire business to offer his services while doing freelance heroics to clean Harlem of crime.

Having been trained in the marines and police, Luke is a highly skilled expert in hand to hand combat, bare knuckle boxing, boxing and street fighting. Having been infused with a variant of the Super-Soldier Serum, Cage gained superhuman strength that allows him to commits feats like stopping a moving train and lift 24 tons. As the serum was mixed with gene traits of Abalone DNA, Cage has extremely durable skin which make him fireproof and bullet-proof with an accelerated healing ability. He also has an enhanced muscle and skeleton structure, superhuman stamina, and regenerative healing factor. Cage resorts to using his strength while fighting, but he is nevertheless a skilled combatant, using brawling and street fighting techniques if he does not want to injure opponents weaker than himself. 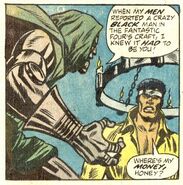 Luke Cage confronting Doom over the money that he owes.