Lex Luthor is one of the main antagonists from DC Comics and the arch-nemesis of Superman. He previously fought Iron Man in the 46th episode of DEATH BATTLE!, Iron Man VS Lex Luthor, and Doctor Doom in the 142nd episode, Lex Luthor VS Doctor Doom.

With the Injustice League

With The Legion of Doom

Alexander Joseph "Lex" Luthor is an admirably self-made man who is CEO of LexCorp, a sizable conglomerate based in Metropolis, as well as the third richest man of the world. However, though he participates in charity events, Luthor is motivated by ego and pride rather than morality. In fact, LexCorp is a front for organized black market arms trades and other shady deals. It was this lust for power that eventually made him the sworn enemy of Superman, who Luthor gradually grew jealous of to the point of attempting to get rid the alien with malicious intent. To that end, Luthor hires and has even played a part in creating some of Superman's enemies, and if he has to battle the Man of Tomorrow or his allies, he will utilize his own war suit.

Despite being a normal human, Lex Luthor possesses a keen genius-Level intellect as well as a photographic memory. At his peak, his vast intelligence and technological know-how is matched only by a handful of other characters in DC (including superhumans and gods). While having some skill in judo, taekwondo, boxing, swordplay, and gun handling, Luthor is the type who prepared for a fight where he has an unfair advantage over his opponent.

Lex is infamous for his use of kryptonite. Due to his massive wealth he's always guaranteed to have some on hand. He typically uses basic chunks of kryptonite for traps. However Lex has also weaponized kryptonite in multiple ways; Kryptonite lasers, axes, spears, brass knuckles [1] and even a baseball bat [2].

During his conflict with Superman, Luthor acquired Kryptonian battle armor and had his top engineers reverse-engineer a suit of power-armor capable of defeating Superman. The first model was powered by a solar battery, but Luthor later made a series of upgrades by combining the technologies of Apokolips and Brainaic into the suit's design. The user gains superhuman strength and durability with the suit able to fire blasts of Green-Kryptonite energy and generate a protective force field around the entire body that enables travel in space.

Lex designed the suit primarily to have as much armor and energy shields as possible to outlast Superman. Lex's suit (including the 'Giant Suit' variation) clearly doesn't have the same level of strength or speed as Superman; but this is irrelevant as the kryptonite itself becomes an equalizer. However Superman (in his later depictions at least) has so much experience being exposed to kryptonite that he gained a slight resistance to it, and so is still able to fight the Warsuit on equal footing.

The Warsuit comes in two different sizes; the basic Warsuit and the Giant Suit (which is basically a much larger and more powerful variation). The Warsuit is about the same size as Lex himself while the Giant Suit is almost as big as Ironman's Hulk Buster and is slightly taller than Doomsday. Lex also has giant mechs with similar kryptonite weapons. In the Legoverse he has other variations of his Warsuit; the Decoy Suit allows Lex to summon Lexcorp robots, the Stealth Suit makes him invisible and the Shield Suit gives him extra defenses.

After Superman was apparently killed, a seemingly repentant Lex decides to take over for the Man of Steel and made a 'Super Lex Warsuit'. He creates a more steam-lined version of his Warsuit and designed it after Superman's uniform. While it did have kryptonite darts; it focused primarily on plasma weapons instead of kryptonite energy. While it was easily overpowered by Doomsday; the suit is still just as powerful, if not moreso than his original Warsuit.

While he initially carried a fragment of kryptonite on his person while dealing with Superman, or something else to keep the man of steel occupied, Luthor later liquefied it and mixed it with a sample of Bane's Venom into a steroid he injects himself with. While it gives Luthor peak human strength and slightly weaken Superman in his presence, the liquid kryptonite had unexpected side effects. While Luthor now has a heightened superhuman immune system, it also causes him to suffer brief lapses of sanity and long-term cancerous effects on his system. But later reverse-engineering Brainiac's nanites for his use allowed Luthor to remove cancerous cells from his system while enhancing himself further physically and mentally.

A link to other Lex Luthor feats and faults [12]

Lex Luthor, the God of Apokolips.

When Lex Luthor needs the help of Superman, you know that this shit is serious. 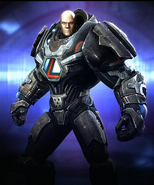 Lex Luthor in Injustice: Gods Among Us