Kratos is the main protagonist of the video game series, God of War. He previously fought Spawn in the 10th episode of DEATH BATTLE!, Kratos VS Spawn. He also fought Dante in an episode of DBX.

A mighty warrior of Spartan general, a demigod born from the loins of Zeus, Kratos offered life in servitude to Ares to defeat a barbarian horde. But Kratos broke his oath on the day that Ares tricked him into slaughtering his own wife and daughter while burning a temple dedicated to Athena to the ground. After having the white ashes of his deceased family bound to his skin, Kratos sought repentance for his sin. Though Kratos succeeded after ten years of servitude with the final task involving killing Ares, Kratos finds that he would still bear the sin and eventually finds himself waging war against the Olympus itself when Zeus makes an attempt on his life.

As a resident of the militant state of Sparta, Kratos is trained to be tough and heartless while also skilled in various weapons besides the standard weapons used by Spartan warriors. Kratos can also enter a berserk state known as the Rage of Sparta, increasing his speed, striking strength, and durability.

From his time of servitude to Ares to the end of his war on Olympus, Kratos's fighting style revolves on the use of two falchion-like blades attached to long chains bound to his forearms. Originally Kratos used the Blades of Chaos he was given to Ares before Athena gives him the Blades of Athena to signify his brief status as the new god of war. But when Kratos embarks on his vendetta on Zeus, he is given the Blades of Exile as his current weapon of trade. But Kratos also obtained various weapons and spells from various gods, monsters, and heroes.

After settling his affairs with Zeus and his bloodstained past, Kratos begins his life anew away from Greece in the north. So far, Kratos uses a magical battleaxe as his weapon of trade. 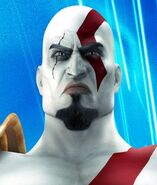 Kratos as seen in Playstation All Stars

Kratos as he appears in God of War IV