Caitlin Snow is the third Killer Frost, and a reformed supervillain from DC Comics.

Caitlin Snow was originally a S.T.A.R. Labs scientist who was placed in charge of a thermodynamic engine. But, when the Arctic facility she was working at was attacked by H.I.V.E. (the Hierarchy of International Vengeance and Extermination), Snow got locked in with the engine. Exposure to its effects while trying to disable it transformed her into a metahuman that can absorb heat from a living being upon physical contact, and project icicles. It also turned her into a sort of "heat vampire," and she came to be known as the criminal "Killer Frost." But the actions of Eclipso negated Caitlin's pseudo-vampirism, allowing her to make a alliance with Batman while putting her dark past behind her. 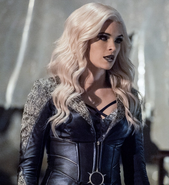