Jotaro Kujo is the main protagonist of the manga series, JoJo's Bizarre Adventure's Part III: Stardust Crusaders, he is also a major ally in Part IV: Diamond Is Unbreakable and Part VI: Stone Ocean. Jotaro is serious, stoic and intelligent, he lends great power and stability to his allies.

As a young boy growing up in Japan, Jotaro Kujo was a nice but strong kid. As he grew into the age of 17, becoming a delinquent, Jotaro put himself in jail on the account of having an "evil spirit". His grandfather, Joseph Joestar came from New York to inform him that his "evil spirit" is an entity known as a Stand. Joseph reveals this to be connected to the body of their ancestor Jonathan Joestar taken by DIO for his own use, awaking Stands in Jonathan's descendants. This also affected Jotaro's mother Holy Joestar Kujo, whose lack of fighting spirit is calling her Stand to kill her. This forces Jotaro and accompanies his grandfather and four other Stand users; Avdol, Kakyoin, Jean-Pierre Polnareff, & Iggy, to Cairo, Egypt to kill DIO and break his influence on the Joestar line. Since DIO's defeat, Jotaro had taken up the duty of investigating other Stand users and hunting down hostile Stand users such as Anjuro and Akira, cleaning up the last of DIO's followers.

Jotaro: You Pissed Me Off! (ASB) 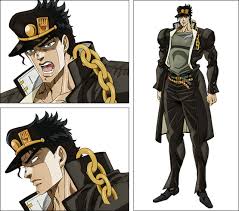 Jotaro in the Anime

Jotaro Heritage for the Future 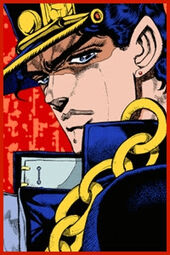 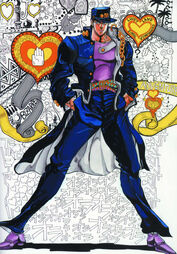 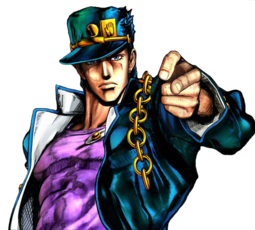 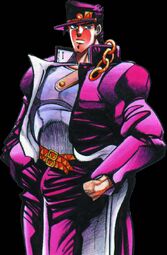 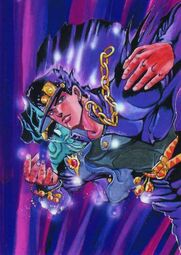 SUTAAAA FIIIINGGAAAAAAHH
Add a photo to this gallery
Retrieved from "https://deathbattlefanon.fandom.com/wiki/Jotaro_Kujo?oldid=1201644"
Community content is available under CC-BY-SA unless otherwise noted.