-The DBF Wiki’s 9 Year Anniversary is coming up on 17th August. For more information on how you can get involved with the anniversary celebrations, click here.

View source
watch 02:58
No Man's Sky Update - The Loop
Do you like this video?
Play Sound

Jonathan "Johnny" Joestar was born in a family of former aristocrats in Danville, Kentucky – his father then a wealthy owner of several farms and an acclaimed horse trainer who had won the Triple Crown seven times. He was successful enough for the family to live comfortably in England for several years.

Johnny was five when he first rode a horse. His father, upon seeing Johnny observe the motions of the horse, considered him "a horse riding genius", which Johnny himself would also believe. However, Mr. Joestar was strict towards Johnny and always seemed to favour his older brother Nicholas.

When young Johnny took out his pet mouse Danny and secretly fed it under the table during dinner, his father, upon discovering it, ordered Johnny to drown the animal as punishment. Heartbroken, Johnny was unable to bring himself to do the deed and followed Nicholas' suggestion to set Danny free into the woods instead.

Years later, Nicholas grew into a promising jockey-to-be, much admired by Johnny. One day, Nicholas' horse stumbled from something on the ground, costing Nicholas his life. Johnny saw a white mouse run from the commotion into the woods – a mouse he believed to be Danny.

Seven years later, it was Johnny who rose to fame as a racing prodigy. He was pampered greatly: people would bring him riches, politicians and royalty would visit him, and rich girls would sleep with him. His father still did not acknowledge him and his feats, possibly because Johnny never managed to beat Diego Brando at racing. In a violent fight between them, Johnny's father uttered that "God had taken the wrong son" before finally throwing Johnny out of the household. Still, this did not deter Johnny, and he would go on to win the Kentucky Derby at a tender age of sixteen.

At one point, while waiting in line for a play, the girl he was with convinced him to cut to the front of the line and bribed the bouncers to throw out the youth in the front of the line - who had been waiting through the night. The youth shot Johnny in the spine, paralysing him from the waist down and sending him to a hospital where he was physically abused. Having lost all the friends and respect he had earned as a jockey, no one visited him during his stay in the hospital.

Johnny first appears among the crowd who witness the confrontation between Gyro Zeppeli and a pickpocket who had stolen money from him. Afterwards, when Johnny follows and touches the Steel Ball Gyro had used, which was still spinning, his legs moved enough to allow him to stand. Johnny chases after Gyro, who compliments his upper body strength, but denies that the Steel Ball can enable him to walk again. However, Johnny is not deterred; he decides to chase down Gyro by entering the race to learn more about the Steel Balls and starts by trying to ride a horse.

Johnny's main combat capabilities stem from Spin (Part 7's answer to Part 1's Hamon) and his Stand, Tusk. He can best augment the Spin's power with his horse, which allows for the perfect emulation of the "golden rectangle", the property Spin centres around. 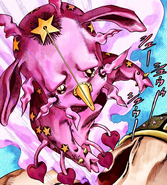 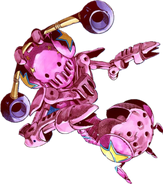 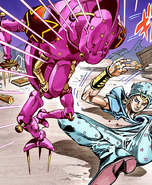 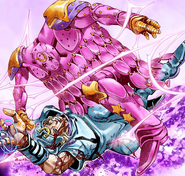 Steel Ball Run in a nutshell.

The ACTs as Dogs
Community content is available under CC-BY-SA unless otherwise noted.
Advertisement