Death Battle Fanon Wiki
Register
Don't have an account?
Sign In
Advertisement
in: What-If? Combatants, Combatants with a rival, Eponymous Combatants,
and 45 more

James "Jimmy" Isaac Neutron is the main protagonist of the Nickelodeon animated series, The Adventures of Jimmy Neutron: Boy Genius.

James "Jimmy" Isaac Neutron is a 10 year old pint-sized boy genius with an I.Q. of 210 who lives in the town of Retroville. He is often considered a nerd out of touch, inventing things both in pursuit of science as well as for his own desires. Often times, Jimmy would invent all sorts of gizmos & gadgets to increase his own popularity. Jimmy is a nice, friendly and outgoing kid, mostly using his inventions with good intent, though statistically, they end up almost destroying Retroville (or worse) more than half the time.

Jimmy as he appears in the unaired pilot episode, Runaway Rocketboy!

Jimmy as he appears in Jimmy Neutron: Boy Genius

Jimmy as he appears in children's books 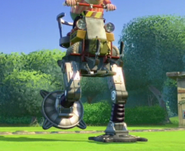