Jango Fett, is a character from the Star Wars media franchise. He is a father of his own clone Boba Fett. He fought Master Chief in the 1st episode of DBX in Season 1.

Boba Fett, one of Jango's many clones 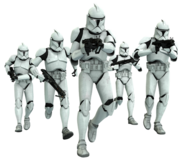 Clonetroopers, an army of clones of Jango
Add a photo to this gallery

Retrieved from "https://deathbattlefanon.fandom.com/wiki/Jango_Fett?oldid=1138007"
Community content is available under CC-BY-SA unless otherwise noted.