Invincible, also known as Mark Grayson, is the main protagonist of the comic book series, Invincible, published by Image Comics.

Mark Grayson is Invincible, a half-human half-Viltrumite superhero with the powers of strength, flight, durability, and speed. Raised in a household where his father was the world's most famous superhero, Mark has always had an unconventional family. Following in his father's footsteps, upon gaining his powers during puberty, Mark decided to use his powers for good. However, shortly into his superhero career, he learned that his father was designated by the Viltrumites to conquer Earth and enslave humans. His ideologies would evolve over the course of the story due to this revelation; Initially, he stays a superhero not out of vengeance or redemption, but because it's the right thing to do. However, Invincible has a pretty shitty life, and his attitudes can change to reflect that. Extreme threats have caused him to take extreme measures, leading to his trademark brutal fighting style. While he believes not all problems can be solved with fists, he's not afraid to get dirty. 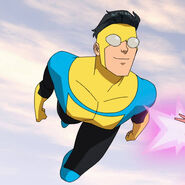 Invincible as he appears in the animated series

With the Coalition of Planets

As Viltrumite Emperor
Community content is available under CC-BY-SA unless otherwise noted.
Advertisement