-The DBF Wiki’s 9 Year Anniversary is coming up on 17th August. For more information on how you can get involved with the anniversary celebrations, click here.

View source
watch 02:58
No Man's Sky Update - The Loop
Do you like this video?
Play Sound

Like the other animatronics, Freddy Fazbear will try to forcefully stuff any human he sees after hours into a Freddy Fazbear suit, resulting in death.

Freddy's jumpscare when the power goes out in the first game.

Freddy's jumpscare in the second game.

Freddy, alongside Bonnie and Chica, in the Celebrate poster in The Office 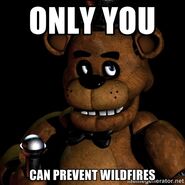 Only you can prevent wildfires 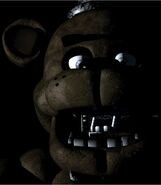 Freddy opening his mouth, showing parts of his endoskeleton 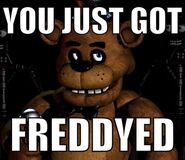 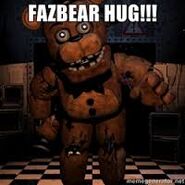 Freddy Fazbear as he appears in the show ‘Freddy & Friends: On Tour’