Necro: Original Characters are an interesting phenomenon. Some of them suck, and some don't.

Mercer: And it's our job to analyze their weapons, armor and skills to find out who would win a DEATH BATTLE! 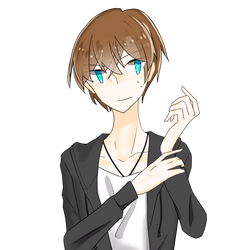 Necromercer Version (Volume 2-6)
Add a photo to this gallery

Necro: Born in 1998, Felix Chilling had a normal upbringing and early life, the only real bump being that his grandfather died when he was twelve.

Mercer: And his grandfather left him with three words of wisdom. The First, that Monsters were real. And not all of them were human. The Second, evil will always exist. And finally, being normal is the safest way to live.

Necro: Felix took these things to heart, but never really understood any of them. At least, until he turned twenty two and went to a cabin with his roommates, Paul and Jared.

Mercer: Anyway, the power was out, and Paul and Jared went to fix the back up generator, and Paul was possessed by the spirit of the Wendigo, killing and eating Jared.

Necro: Felix went back to check it out, found Jared and ended up fighting with the possessed Paul, killing him with Jared's wrench, which just so happened to be made of silver, one of the two weaknesses of the Wendigo.

Mercer: Felix ended up absorbing Paul's heart, thanks to trying to crush it.

Necro: This transformed Felix into a Tether, which means that Felix is now fused with the Wendigo's spirit, ending up with a sweet head voice, (Which just so happened to be Paul) Felix got some awesome supernatural powers!

Mercer: Like his ability to manipulate ice! He can make just about any constructs with his ice, as long as they are non living.

Necro: And he can even manipulate air and create storms and tornados, hell he even uses this power to fly!

Mercer: And when he needs some extra OMPH with his attacks, he can fuse his wind and ice powers to create a blizzard, which can freeze most anything to shreds in just a few seconds.

Necro: Felix can read minds, and due to being a monster-human hybrid, Felix can manipulate and attack his target's souls directly.

Mercer: And if things go south, Felix can even mess with time, like rewinding, slowing or even stopping time entirely! Of course, he can only do so for a minute or so, but it's still quite effective for getting out of sticky situations.

Necro: Felix carries a few weapons on him, just in case he ends up in a fight, which happens a lot. The first of which are Felix's great knives, a pair of large knives, which he can use with deadly skill, after some minor training from James, a military trained knife fighter. The great Knives are unbreakable, and Felix can use them to channel his ice and wind powers, for elemental charged attacks.

Mercer: Felix also wears a pendant, which nullifies his weakness to silver. And if Felix meets an exceptionally powerful monster, he tends to use his runes against it. As of yet, Felix has four runes. The first rune is one he uses for defense, as it creates a force field around him.

Necro: The next one is his electricity rune, one which he uses to make himself faster, and to manipulate electricity, which he tends to mix with his wind powers to create lighting storms.

Mercer: Up next is the heal rune, and item that can heal any damage Felix takes instantly.

Popup: Felix possess an incredibly good healing factor, but it can be overtaxed, hence his heal rune.

Necro: And finally, we have the seal rune, an item which can seal almost any being in a block of ice. Normally one could easily break out of this, but Felix's seal specifically works on super natural beings, preventing powerful monsters like the Moth Man from breaking out of it. Granted, it has never held tethers for a long time, as they are not fully monster.

Mercer: But Felix has quite a few physical powers and abilities, like his abilities to stretch his limbs, move in unnatural ways, like folding himself in half.

Necro: Felix also has an insane healing factor, easily being able to heal from being cut in half, impaled and decapitated, and even partial disintegration! Granted, it's not the fastest healing factor in series, as it takes a few minutes for Felix to regrow his head, so he tends to just reattach his limbs.

Mercer: Well, we've put it off enough, so let's get to Felix's stats.

Necro: Well, lets cover strength first. Felix is easily strong enough to smash stone and steel with just a  single strike, as well as being able to fight on par with guys who can collapse caves, obliterate cities, and even destroy continents!

Necro: Akihiro Dragoscale was born as the youngest and only son of the Dragon King.

Mercer: How come he gets a cool dad? All I got was a German drunk!

Necro: Life's not fair Mercer. Anyway, he had an evil demon, Mephistospheles after him, so his family sent him out of the Dragon Kingdom with out much of a debate.

Necro: No. Not by any means.

Mercer: Yeah, right. Well, he had a normal upbringing, living with his foster father and sister for about fifteen years.

Necro: Then, When he was in high school, he ended up in some rather odd situations, all of which led up to him meeting up with his older sister, the princess of the Dragon Kingdom. She took him back to the Dragon Kingdom, and one exposition filled scene later, the good stuff starts!

Mercer: Akihiro got the Dragon Sword from his father, and ended up fulfilling a secret prophecy that his life had been revolving around! After a good bit of training, that is.

Necro: After multiple journeys, Akihiro made a bunch of friends, a good deal of them from different kingdoms.

Mercer: After a LOT of training, Akihiro went and challenged the Demon King, and after a long and rather epic fight, Akihiro emerged victorious.

Necro: But to do this, he would need a lot of powers and abilities.

Mercer: Akihiro is a powerful fighter and master swordsman, easily being able to beat superhuman fighters with little to no effort!

I would like to thank Supersayian2link for making this battle possible, as he allowed me to use Akihiro.

Retrieved from "https://deathbattlefanon.fandom.com/wiki/Felix_Chilling_vs_Akihiro_Dragoscale?oldid=1197417"
Community content is available under CC-BY-SA unless otherwise noted.