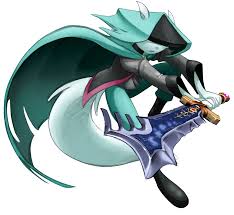 Dust, also known as Sen Mithrarin, is the main protagonist of the 2D sidescroller video game, Dust: An Elysian Tail.

Dust was created from the essence of the Life Thread itself to stop the evil General Gaius from wiping the Moonblood race off the face of the planet. By combining the soul of innocence that is Jin and the soul of his murderer, the Royal Assassin, Cassius, the Moonbloods created Mithrarin, or "He who is born of the dust." Along with the Blade of Ahrah and its guardian, Fidget, Dust sets out on his journey to stop the evil general and recover his own past.

Retrieved from "https://deathbattlefanon.fandom.com/wiki/Dust?oldid=1093087"
Community content is available under CC-BY-SA unless otherwise noted.