Diavolo (Devil in Italian) is the main antagonist of the manga series, JoJo's Bizarre Adventure's Part V: Vento Aureo (Golden Wind). As Passione's boss, Diavolo oversees a pernicious influence on the Neapolitan population. He is the father of Trish Una. The other half of his split personality is Vinegar Doppio.

Diavolo was born in an all-female prison sometime in 1967, but his birth is a mystery as his mother claimed she had been pregnant for two years and every guard was female. Due to serving a long jail time, he was sent to her hometown of Sardinia to live with the priest that worked there. According to neighbors and friends, he was a frank yet dim-witted and timid boy that desired to become a sailor rather than a priest like his guardian wanted.  When he was around 18, he met Donatella Una, who had been vacationing in Sardinia with her family - they got along well enough to where Donatella fell madly in love with Diavolo and slept with him, eventually becoming pregnant herself with Trish Una.  This is the first known use of Diavolo having a false name, that of "Solido Nazo", and most of what he told her was a bold-faced lie which was eventually passed down to Trish. He made a promise to return to Donatella in the future and left but never came back for her.

When he was 19 and begun consorting with a girlfriend, the priest believed it was time for Diavolo to have a car and begun to construct a garage.  This caused him to find a young woman, very likely his mother buried alive with her mouth and eyes sewed shut.  Coincidentally, that night a fire broke out and consumed the village, killing the priest and five other people. Diavolo had been listed as dead and went a dangerous path, going to Egypt on an excavation. Upon finding six arrows, he quickly stole them and left, selling five to Enya for a huge sum of money and keeping the last one for himself (which later became Polpo's arrow and used by Black Sabbath to test new members).  And at some date after, he created Passione. 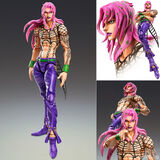 How It Works v1

How It Works v2

How It Works v3

This Explains one of KC's abilities

Illustration of how it works 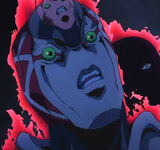 King Crimson as it appears in the anime

How it works (Anime ver.)
Community content is available under CC-BY-SA unless otherwise noted.
Advertisement