Dexter is the main protagonist of the Cartoon Network animated series, Dexter's Laboratory.

Dexter is an 8 year old "Boy Genius" (self-described) in the town of Genius Grove. When he was born, he had an abnormally large head. Because of this, the doctors told Dexter's parents he was a genius and gave him a pair of glasses. Ever since he started crawling, Dexter has started inventing. When his sister, Dee Dee, started messing with his inventions, Dexter had turned into a recluse, hiding his inventions from all, and building greater ones to further understand the world and study science.

Dexter as he appears in Seasons 1-2 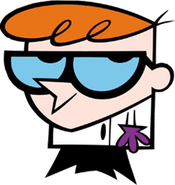 Dexter as he appears in Seasons 3-4

Dexter as he appears in Cartoon Network: Punch Time Explosion 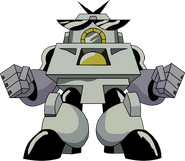 Dexter as he appears in Cartoon Network: Fusion Fall
Community content is available under CC-BY-SA unless otherwise noted.
Advertisement