Most of Wade Wilson's history is unknown to him, or anyone else for that matter, and even at times when telling a recount, he admits that he is unsure. In some cases, he was some kid picked on and beat up by thugs until he was taken under Nick Fury's wing briefly, a hired mercenary under William Stryker, or a cancer patient who was experimented on by scientists working for Ajax as part of an unethical super soldier project. Regardless of the past, Deadpool is a freelance mercenary with psychological problems and superhuman healing who made a name for himself as one of Marvel's anti-heroes: A bad guy taking out the worse of the worse.

Death Battle Into (Deadpool VS Mask)

Deadpool sitting on his chair while watching TV

Deadpool as seen in the 2016 movie 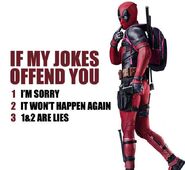 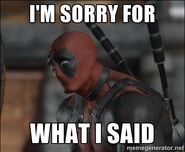 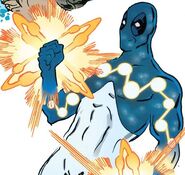 Deadpool in his Captain Universe form

Deadpool as the Herald of Galactus

Deadpool Phoenix Force
Add a photo to this gallery

Retrieved from "https://deathbattlefanon.fandom.com/wiki/Deadpool?oldid=1237472"
Community content is available under CC-BY-SA unless otherwise noted.