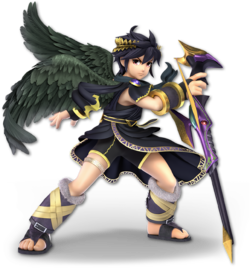 Dark Pit is the anti-hero of the Kid Icarus series of video games.

Dark Pit was created by Pandora's Mirror of Truth in her Labyrinth of Deceit. He was created to be an exact, evil replica of the angel but Pit destroyed the mirror before the copy was fully complete. This meant Dark Pit was an agro antagonist rather than an ouright villain. He would battle Pit several times throughout the story of Kid Icarus: Uprising, but would join forces with him every once in a while for the better good.

In the events of the Chaos Kin, Dark Pit was "less than himself" in the time Pit spent as the Ring of Chaos. From there on, Dark Pit came to accept Pit as a necessity for his own existence, helping him clash with the Chaos Kin. This would result in Pit's near death experience and force Dark Pit to travel to the Underworld to find the Rewind Spring. After the fall of Hades, Dark Pit would become an officer of the Forces of Nature.

Retrieved from "https://deathbattlefanon.fandom.com/wiki/Dark_Pit?oldid=1245883"
Community content is available under CC-BY-SA unless otherwise noted.