Cinder Fall is one of the primary antagonists of Rooster Teeth's web series, RWBY.

Originally an orphan from Mistral, Cinder was adopted and brought to Atlas but was forced to become a slave at the Glass Unicorn hotel by her stepmother. There, she was constantly abused and tortured by her stepfamily. One night, Cinder stolea a sword from a Huntsman named Rhodes, who pitied her and decided to train her in secret to become a Huntress. Years later, when her stepsisters discovered her sword, Cinder mercilessly killde her entire stepfamily, and later Rhodes when he turned on her. The years of abuse took its toll on Cinder, molding her into a sadistic woman craving for power.

Cinder Fall has apparently been part of a small conspiracy led by Salem for some time. Recently, Cinder formed her own band consisting of herself, Mercury Black and Emerald Sustrai.

Among the tasks undertaken by Cinder has been the recruitment of Adam Taurus, the leader of the Faunus revolutionary organization known as the White Fang. Sometime after that, Cinder and her team attacked the Fall Maiden, Amber, and Cinder was able to appropriate some of her powers for herself. After that, she engineered the collapse of the Vytal Festival Tournament and the subsequent fall of Beacon Academy.

It was at this time that Cinder killed Amber, the Fall Maiden, acquiring the rest of her powers, and fought and presumably killed Professor Ozpin, the headmaster of Beacon Academy. She later fought and killed Pyrrha Nikos, a student at Beacon Academy, who was also a wide-recognized combat champion.

Her killing of Pyrrha Nikos, however, was witnessed by Ruby Rose, a huntress-in-training with silver eyes. Ruby unleashed some sort of energy attack, which apparently cost Cinder her left eye, her left arm and her voice, and left her with scars on the left side of her body.

Salem undertook Cinder’s rehabilitation, giving her a Grimm arm to replace the one that she lost to Ruby, and training her to fully utilize the powers she gained as the Fall Maiden. Cinder fought numerous powerful Grimm single-handedly and became a formidable fighter. Along the way, she regained the use of her voice.

Cinder harbored a burning grudge against Ruby for what she did to her at the Fall of Beacon, but she did not let that stand in the way of completing her missions for Salem. So, when she arrived at Haven Academy, she left her associates to fight Ruby, Ozpin and his associates and went with Raven Branwen and Vernal to the school’s vault to steal the Relic of Knowledge that was ensconced there.

Upon reaching the vault, she attacked Vernal in an attempt to steal the Spring Maiden's power for herself. However, she realized that Vernal held no such power in the first place, causing Raven to reveal herself as the true Spring Maiden. The two of them then fought in the vault, with Raven finally overcoming her, and knocking her into a deep crevasse, freezing her body and leaving her to die.

Cinder survived her battle with Raven, and is presently trying to earn her way back into Salem’s good graces by achieving something useful. She has been following Ruby, Professor Ozpin, and the Relic of Knowledge, and has joined forces with Neopolitan to get revenge against Ruby.

Cinder stands 5’11” tall, and has long, thick black hair and yellow-orange eyes. Before her collision with Ruby Rose, Cinder’s preferred outfit was a dark-red, off-the-shoulders, v-neck mini dress with gold designs, worn over black shorts. She accessorized this outfit with a black choker, gold hoop earrings, a black hip bag, black high-heeled shoes and a jewelled anklet on her right ankle.

After her collision with Ruby Rose, her face shows considerable scarring on the left upper-quadrant, and she keeps her hair combed over her left eye, covering a black eyepatch that hides her missing eye. Her new outfit is a longer dark-red dress with dark gold designs, but only her right shoulder is now left uncovered. She accessorizes this outfit with an earring in her right ear.

It is revealed that under her left sleeve, her arm has been replaced by that of a Grimm, with the ability to extend to absurd lengths and absorb power (specifically Maiden's power). 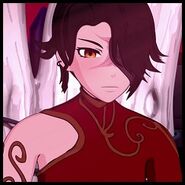 Cinder Fall after the effects of Ruby's silver eyes.