watch 04:21
Wiki Targeted (Games)
Do you like this video?
Play Sound

Captain James Bartholomew Hook is a Disney villain, and the main antagonist of the 1953 animated feature Peter Pan, as well as it's 2002 sequel Return to Neverland. 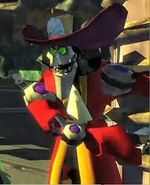 hook as a Robot in Epic Mickey

Killian Jones
Add a photo to this gallery
Retrieved from "https://deathbattlefanon.fandom.com/wiki/Captain_Hook?oldid=1558020"
Community content is available under CC-BY-SA unless otherwise noted.