Death Battle Fanon Wiki
Register
Don't have an account?
Sign In
Advertisement
in: What-If? Combatants, Athlete, Combatants that can absorb energy,
and 15 more

Captain Citrus, real name John Polk, is the main protagonist in a series of comics made by Marvel Comics for the Florida Department of Citrus.

John Polk was a typical young man in Central Florida, growing up on his parent's orange farm, and dreaming of becoming a famous football player. One day, a pair of "solar pods" dropped into the grove, and when John touhed them, they gave him the power of the Sun, channeled through the verdent orange grove that he loves so well.

John Polk is a tall and strong young man, with black hair and brown eyes. When he transforms into Captain Citrus, his hair becomes green, and his physique become super-heroic. His supersuit has an orange center, with yellow sides, green highlights, orange gloves and yellow boots. His mask is orange, and sports yellow-tinted goggles.

Though Captain Citrus uses the energy of the Sun, his real power comes from within, so separating him from sunlight will not affect him.

Captain Citrus carries no weapons beyond those that he makes out of solid light. 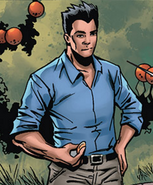 John Polk, when out of uniform.
Community content is available under CC-BY-SA unless otherwise noted.
Advertisement