Note: To best analyze Buzz, we need to view him based on his abilities throughout all canons, including the animated cartoon Buzz Lightyear of Star Command and the videogames. For example, if the cartoon allows Buzz to fly then it must be considered despite the fact that Andy's Buzz cannot fly. 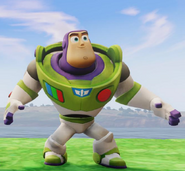