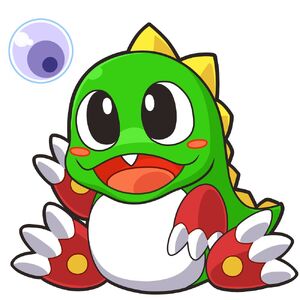 Bub is one of the main protagonists of the video game series, Bubble Bobble.

Bub, along with his brother, Bob, were turned into Bubble Dragons by Baron Von Blubba after attempting to rescue their girlfriends, Betty and Patty, who were kidnapped after wandering into the Wizard's Forest. The duo sets out to travel through the 100 levels of the Cave of Monsters and defeat the girls' kidnapper.

Upon reaching the bottom of the cave and defeating Super Drunk, Bub and Bob manage to rescue their girlfriends, as well as their parents, who were under the control of an unknown figure (later confirmed to be the Boss of Dark Shadow in Rainbow Islands) who had been giving orders to Super Drunk.

Bub's trademark ability involves producing and firing bubbles from his mouth. If the bubbles make contact with an opponent, they get trapped inside, allowing Bub to pop the bubble with his spines in order to defeat them. Along with utilizing the bubbles to attack foes, Bub is also able to jump on them in order to reach new heights.

ALL INFORMATION WAS ORIGINALLY FOUND [1]