Blake Belladonna is one of the main protagonists from the Rooster Teeth web series, RWBY. She also appears as a playable character in the video games, RWBY: Grimm Eclipse and BlazBlue: Cross Tag Battle. She appeared in a episode of DBX where she fought against Inuyasha from the manga/anime of the same name.

Raised by a Faunus couple in Menagerie, Blake's father was the leader of the White Fang, leading peaceful protests concerning the inequality between Faunus and humans, and Blake was a strong believer in this cause. However, once her father stepped down to be chief of Menagerie, her childhood friend Adam Taurus stepped up and began leading violent attacks against the humans, causing Blake to leave the White Fang. She then enrolled in Beacon Academy but hid her cat ears with a bow. With team RWBY, she trained as a huntress to set things right, but at the Fall of Beacon, Adam and the White Fang came for her and her friends, causing her to run. Since then, she has traveled home and reconciled with her parents at Menagerie and plans to reform the White Fang. After the events at the battle at Haven, she has reunited with the rest of team RWBY. During her fight with Adam, Gambol Shroud was broken due to him breaking it in the episode "The Lady in the Shoe" by cleaving the blade in half.

Personal (Note: She slowly overcomes them throughout the story)

Blake in her uniform

Blake in her PJ's 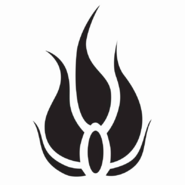 Blake without her bow

Don't let the others find out about this Blake. 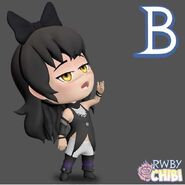 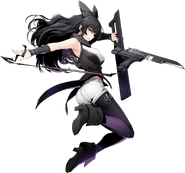 Blake as she appears in BlazBlue Cross Tag Battle DLC

Gambol Shroud transforming
Add a photo to this gallery
Retrieved from "https://deathbattlefanon.fandom.com/wiki/Blake_Belladonna?oldid=1241965"
Community content is available under CC-BY-SA unless otherwise noted.