Ben Tennyson is the main protagonist of the Ben 10 media franchise. He previously fought Green Lantern in the 109th episode of Death Battle, Ben 10 VS Green Lantern. He also fought Danny Phantom in an episode of DBX.

With Gwen and Kevin

Ben Tennyson was 10 when he found an Omnitrix, a powerful alien device that made his summer vacation fun. The device granted him the ability to turn into many different aliens.

Ben's physical appearance has changed throughout the series from a ten-year-old to a sixteen-year-old. However, he retains some recurring characteristics. He has shaggy brown hair, green eyes, pale skin, and he's quite skinny for his age, though he shows a lot of muscle definition due to being athletic.

Initially cocky, childish, and arrogant, Ben's immaturity and attention-seeking behaviour often led him to joke around, regardless of the situation. His allies often criticized his attitude, unaware of the fact that he used humour to mask his fears. Despite some childish attitude, he was heroic, caring, and generally good-natured, always willing to save others at any time. As seen in Heroes United, Ben seems to be oblivious to certain things, such as the fact that he was transported to another dimension, yet he thought he was still in his world.

Over the years, Ben has displayed good leadership skills, as well as the ability to adapt his attitude to a situation, becoming serious when it's called for. He became more mature, responsible, and sensible. He's kind-hearted, willing to sacrifice even his own life for others. His idealistic views and unwillingness to compromise his values – aspects condemned by Azmuth, yet commended by others – sometimes drive him to act against reason, such as helping his enemies if they need it (most remarkably Vilgax). Professor Paradox has praised Ben's good nature, going so far as to say he had the gift to make the right choices at the right moments.

However, when Ben fails to save someone, or if someone gets hurt because of his failures, he becomes angry and much more violent. Perhaps the most notable of these instances is when Kevin willingly mutated himself to succeed where Ben had failed and stop Aggregor, Ben was set on killing Kevin, even fighting Gwen when she refused to help him. He also threatened to hunt down and destroy the Forever Knights once making Driscoll promise to cease the hunting of aliens.

Though often stated to be silly or unintelligent because of his immaturity, Ben is cunning and resourceful when needed, quickly adapting when the Omnitrix doesn't provide him with the alien he wanted.

Later on, Ben starts thinking of himself as more of a superhero than a Plumber, often remarking that he's not a cop, but a superhero. Although he once again became cocky, he retained his selfless and heroic nature.

A crystalline race that originally dwelled beneath Petropia's surface, the Petrosapiens became explorers after centuries of warfare opened their eyes to the survival of their planet and then the universe. Highly resistant to most physical attacks, the Petrosapiens can manipulate their crystalline makeup to alter their bodies into crude tools, such as blades and projectile shards. They can also refract, absorb and redirect light and energy beams, channelling them through their bodies and projecting them back at their source. 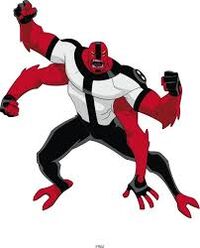 The Tetramand are a warrior race with four arms and four eyes, the former giving them a considerable advantage in close hand-to-hand combat. They are brawlers in a sense but developed skillsets to play on their physiology like creating a sonic wave that is produced by smashing together all four hands concurrently. A Tetramand's dense skin makes them fireproof and their leg muscles allow them to jump at a height of several stories.
Grey Matter

The Galvan are an amphibious, insectivorous species that are extremely intelligent to being called the smartest begins due to their brains, able to understand and operate virtually any machine within seconds. Standing at 5 feet, their bodies are flexible to fit into tight spaces and able to almost any surface, Galavans usually outsmart their opponents rather than directly confront them. Notable members of the race include the Omnitrix's creator Azmuth and his rogue apprentice Albedo.
Upgrade

Galvanic Mechamorphs are a techno-organic species that were accidentally created by Azmuth when he and his fellow Galvan used nanotechnology to terraform Galvan Prime's moon Galvan B for habitation. Able to merge any form of technology due to their malleable nanite-based bodies, an Galvanic Mechamorph can upgrade any machine they merged into into a more advanced form. They can also fire a powerful optic beam.

The Lepidopterrans are an insectoid species who are extremely acrobatic flyers, able to pull off amazing maneuvers of precision and grace, while stronger than a human. They can also excrete high pressured streams of some green viscous liquid or methane gas, both of which smell terrible.

An amphibious species from the water planet Piscciss, Piscciss Volanns thrive in water and are strong enough to lift more than their own weight while highly agile and dexterous. Their large jaws, sharp teeth, and sharp claws and shred through metal. are his most deadly weapon, being able to shred even metal from submarines. He also possesses sharp claws that can damage metal. While on land, they can turn their tails into legs.

Though considered undead, each having personal deformities and tentacles, Ectonurites are an entirely different of a form of life compared to other species and wear a protective second skin to conceal their nightmarish appearance from others and any form of light. The density altering properties of their protoplasmic bodies allow them to phase through matter, become intangible, and possess other lifeforms. They also possess powerful telekinetic abilities and become stronger in absolute darkness. The greatest trait of an Ectonurite is that every cell contains an exact genetic memory that allows a deceased Ectonurite to reconstitute itself from the remains.

One notable Ectonurite is High Ecto-Lord Zs'Skayr, who reconstituted himself from the Omnitrix and became a nemesis to Ben Tennyson before physically and metaphysically until Zs'Skayr's consciousness was purged from the genetic sample.

Way Big
Upchuck
Gax
Wild Mutt
Snare-Oh
Frankenstrike
The majority of Anur Transyl, Transylians are cyborgs whose augmented bodies give them superhuman strength and endure extreme cold and the vacuum of space. The conductors on their bodies enable them to produce electric bursts, manipulate electromagnetism, and even heal others. They can connect also interface with technology and machinery.
Ditto
Eye Guy
Eon
Feedback
Swampfire

Has incredible digging capabilities, enhanced strength, and, durability. Able to cause fissures and earthquakes by placing his drill-hands on the ground and pumping the jackhammer pistons on his elbows. He can also use the pistons to cause shockwaves and launch objects he is holding.