Beerus is a character from the anime/manga series, Dragon Ball. He is the God of Destruction of the 7th Universe, essentially making him among the strongest beings in his entire universe. He previously fought Sailor Galaxia in the 130th episode of Death Battle, Beerus VS Sailor Galaxia.

In the Dragonball series, there are twelve beings of mass galactic destruction known as the Gods of Destruction. These beings are a necessary evil since they maintain balance in their realms by wiping out planets that are created by the Supreme Kais. The most feared of the destroyers is Beerus, who is in charge of Universe 7 with his attendant Whis his sole companion. While Beerus fulfil his role while travelling the cosmos, Beerus's reason for destroying planets borders more towards whim than universal balance. Despite his having a sleeping period of thirty-nine years, an extra fifteen years when oversleeping, Beerus was an influence in his universe's affairs that include his indirect role in plant Vegeta's destruction. Before his previous rest, Beerus learned that a strong opponent called a Super Saiyan God would appear before him. Beerus woke up and found that opponent to be Goku.

Having been trained by Whis in martial arts, Beerus usually uses his power to destroy planets rather than fight. Such examples include tapping a table on the planet's surface to blow half of the world up and then wiping out another when he let a tiny drop of energy on his finger hit the surface. He can even wipe out entire solar systems with ease. It is stated in Dragon Ball Super that he is capable of destroying everything in the entire universe all at once.

Beerus is the only God of Destruction to have showcased the ability to utilize Ultra Instinct, as he did so against the other eleven Gods of Destruction (who had decided to team up on him) during the Manga version of the Zen-Exhibition Match. However, he does not have complete mastery over the technique, as he is not only incapable of attacking instinctively but can also be snuck up on by people of equal strength to him, as shown during the Zen-Exhibition Match. 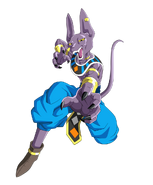 Beerus Charging up this blast to destroy Earth 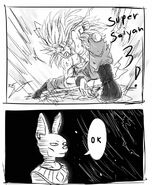 Goku SSJ3 vs Beerus in the nutshell

Add a photo to this gallery
Retrieved from "https://deathbattlefanon.fandom.com/wiki/Beerus?oldid=1425567"
Community content is available under CC-BY-SA unless otherwise noted.