Bayonetta is the main protagonist of the eponymous video game series. She previously fought Dante in the 58th episode of Death Battle, Dante VS Bayonetta.

Bayonetta was born in Vigrid from the forbidden union of a Lumen Sage called Father Balder and an Umbran Witch called Rosa: the Witch was imprisoned and the Sage exiled from his clan. Bayonetta's birth caused a rift between the formally peaceful clans and eventually led to them engaging in a war. Bayonetta became a black sheep among the Umbran Witches, and during the war, Jeanne, a former childhood friend and rival, seals her away from the world while wiping her memory to protect her from those who would exploit her. For the next five hundred years, she is sealed in a coffin at the bottom of a lake. She is later rescued, at Father Balder's instructions. She goes in search of her forgotten past, heading for her old home of Vigrid, and fighting the angelic forces of Paradiso on the way.

As a combo fighter with superhuman speed and agility, her combat skills being brutal and graceful in landing multiple hits on an opponent with her Bullet Arms fighting style. She also possesses immense superhuman strength and endurance along with her skills as an Umbra Witch.

Bayonetta uses her magic and hair powers to create torture devices or killing machines to kill her enemies.

Bayonetta can summon giant demons to attack her foe. 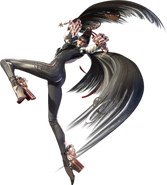 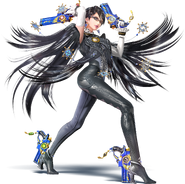 Bayonetta appeared in Super Smash Bros. Wii U/3DS
Add a photo to this gallery
Retrieved from "https://deathbattlefanon.fandom.com/wiki/Bayonetta?oldid=1245449"
Community content is available under CC-BY-SA unless otherwise noted.