Baron Helmut Zemo is a supervillain from Marvel Comics, and a major enemy to Captain America. He's a frequent member of the Masters of Evil, and the son of The 12th Zemo.

Helmut Zemo is a nobleman and scientist born in Leipzig, Germany as the son of Baron Heinrich Zemo, a Nazi operative and one of Captain America's greatest enemies. Zemo was told by his father that only those of great superiority have the right to rule the world. It was only when Heinrich had his final battle with Cap that Helmut tried to take revenge. Having become an engineer and strategist himself, Zemo's first attempt at revenge as the Phoenix resulted in falling into a vat of recreated Adhesive X. Horrible disfigured, Helmut officially took on the Baron Zemo name and vowed revenge on Captain America and the Avengers as he formulated schemes to indirectly destroy them. 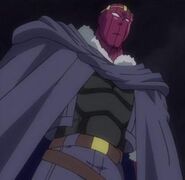