Baragon is an ancient kaiju who had manage to survive the mass extinction of 65 million years ago by adapting to a subterranean environment, surviving under the Earth surface for millions of years until finally emerging back to the surface in 1965 in Akita Prefecture, Japan. After feeding on livestock and rampaging through Japan, Baragon met has match against the mutant humanoid, Frankenstein, having his neck broken and being swallowed into a large chasm.

Baragon would later return in the year 1999 where he and several other kaiju including where related and contained on Ogasawara Island or better known as Monster Island.

In 2001 Baragon returned, this time as one of Japan's Guardian monsters, being a monster of the earth element. There he as well his fellow guardian monsters, Mothra and King Ghidorah, would defend Japan from Godzilla, however Baragon failed to defeat the King of the Monsters.

Baragon has returned many times, mostly as Godzilla ally, defending the Earth from many kaiju alongside many of his fellow Earth Defenders.

Baragon in Frankenstein Coquors the World

Baragon in Destroy All Monsters 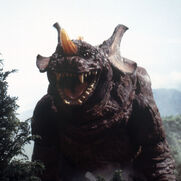 Baragon vs Godzilla in GMK 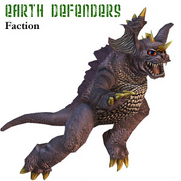 Baragon in Godzilla Save the Earth 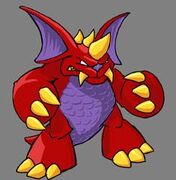 Baragon in Godzilla 2: War of the Monsters

Baragon in Godzilla: Rulers of Earth 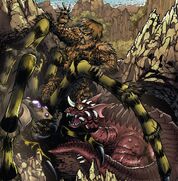 Baragon and Sanda vs Kumonga in Godzilla: Rulers of Earth

Baragon and Trilopod Baragon in Godzilla Rulers of Earth

Baragon vs Anguirus in Godzilla: Rage Across Time 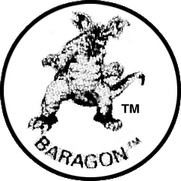