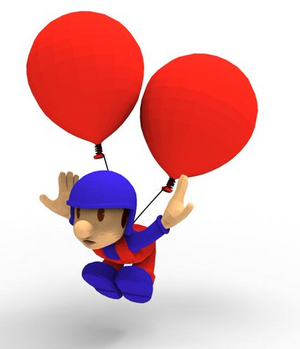 The Balloon Fighter is a young man, who wears a blue helmet, jacket and shoes, along with a pair of red pants. He keeps two red balloons tied to his pants.

Through the lifting power of his balloons, the Balloon fighter is able to fly, controlling his motion by flapping his arms. When he makes contact with some breakable, like a parachute or balloon, he destroys it.

The Balloon Fighter is particularly vulnerable to lightning, a hazard to any flying character, and fish, if he flies to close to the water.