Azula is one of the main antagonists from the animated television series, Avatar: The Last Airbender.

Though she is Zuko's younger sister, Azula is far greater and better than her older brother when it comes to fire-bending, close quarters combat, politics and military strategies.

At a young age, she demonstrated and mastered fourteen arts of fire-bending, to the point of turning her flames blue, making her a fire-bender prodigy.

Azula is as cruel and manipulative as their father Ozai. She has a sadistic streak, ruling others through fear and intimidation as she strives for her father’s approval and recognition. Perfection is Azula’s forte.

Azula is a master fire-bender and is highly clever and cunning. She has incredible fighting prowess and battle tactics that even puts highly trained fire-benders and generals to shame. Azula is very sharp and strict, easily gained respect and command over others with the use of her silver, yet piercing tongue.

While expressing disdain toward her brother Zuko, she shows no signs of hardships on tracking and pursuing him and Iroh, while hunting down Aang at her father's behest. Azula greatly takes pleasure on hunting down her prey.

Azula with only a small group (Mai & Ty Lee), schemed, infiltrated, and took over the impenetrable city Ba Sing Se with little effort, and had even briefly killed the Avatar with her lightning.

Upon her return to the Fire Nation Capital, she became an honorary hero of the Fire Nation along with her brother, whom she shared the glory and achievement much to her amusement and sadism.

Azula hated her mother as she felt unloved by Ursa. This resulted in Azula harboring deep mental instabilities. Her mental state worsened after her childhood friends and subordinate, Mai and Ty Lee, stood up against her and when Ozai leaves her behind in the Fire Nation to succeed him. At this point on, Azula became mentally unstable, she began seeing visions of her mother and believed that others are conspiring against her.

During the climactic event of Sozin’s Comet, Azula was almost crowned the new Fire Lord until her brother Zuko, stopped her coronation, thus preventing Azula from becoming Fire Lord. They dueled for the crown in an Agni Kai. Azula gained the upper hand during the fight, but due to Zuko’s newly found vigor and perspective, he was able to overcome Azula in battle.

It was only after her defeat at the hands of her brother, Zuko and Katara that Azula suffered a complete mental breakdown and was placed in a mental health institute near the Fire Nation Capital in the aftermath of the Hundred Year War.

A year later, now the Fire Lord, Zuko decided to look for his mother. He needed the help of his unhinged sister, Azula, in order to locate their mother’s whereabouts. Azula, restrained in a straitjacket and wheelchair, was presented before Zuko. She agreed to help him on his search (with a hidden motive to murder their mother after learning a half-truth revelation from their father, Ozai over her mother's letter that claimed Zuko was the child of her lover, and uses this opportunity to take over the Fire Nation throne by legitimate right and believing that it would be the solution to stopping her of seeing hallucinations and visions of her mother). Zuko (who believes in redemption and reformation) was convinced, freed Azula from her shackles and placed her under his custody.

Azula later met up with Team Avatar, minus Toph, and not a moment too soon, their reunion turned hostile. Zuko asked and pleaded Team Avatar to accompany him and his sister on searching for their mother. Team Avatar have difficulty on agreeing that Azula would be accompanying them, but heavily accepted her as company, much to their dismay. Thus, the former princess of the Fire Nation briefly joined Team Avatar on their search for Ursa. For a long time, Team Avatar once again experienced awkwardness on their journey.

Despite the (forced) friendly approached by Team Avatar (namely the Avatar himself), Azula was proved to be a hurdle throughout their journey by being rude and mean to the party, provoked and assaults them when given the chance, and goes out on her own away from them. But was helpful nonetheless, when showed her skills and abilities when she aided the party during combat.

Their search led them to Forgetful Valley, and upon many twists and turns, they successfully located and found Ursa. Azula was hell bent on murdering her own mother, but her attempts failed when she was unable to accept the fact that her mother and brother still deeply cared for her, even though the latter endured her harsh treatment she put him through throughout the years since they were children. Azula severed her ties with the party and fled into Forgetful Valley, never to be seen again.

Azula later returned and cause trouble for her brother and Team Avatar. Azula became a lot better, stronger, and much more devious and dangerous than before. Although she recovered from her madness, she still retained a bit of her unhinged and wicked attitude.

Azula lost interest on the throne, believing that her “destiny lies elsewhere” and that is to make her brother, Zuko, a tyrannical ruler like their father Ozai, or to make him someone like herself, brutal and vicious. Azula schemes to worsened Zuko’s reputation as Fire Lord by wreaking havoc from the shadows.

Azula reappeared with her own group of troublemakers she helped freed from the mental health institute she was once sheltered. Azula formed an all-women firebender group called the Fire Warriors, and disguised themselves as Kemurikage (Smoke and Shadow) imposters with Azula acting as their ringleader.

They masqueraded as “spirits” on the Fire Nation, causing imbalance to Zuko’s rule by instigating people to rebel against its ruler, abducting children, and terrorizing citizens, successfully causing a bit of downfall to her brother’s regime as Fire Lord.

Azula and her subordinates disappeared in smoke and lies waiting from the shadows for another opportunity to present itself to ruin her brother’s rule.

Azula during the intro

The royal family of the Fire Nation (Zuko, Ozai & Azula)

Azula of the Fire Nation

Azula with the Dai Li

Azula and her gang at the beach

Azula sitting on a throne

Azula facing Aang on top of the giant drill machine

Azula as the Fire Nation's regent 01

Azula as the Fire Nation's regent 02

A regent Azula is not impressed

Azula in the Search

Azula conjured lightning from her state

Azula during the Search

Azula conjured a ball of lightning

Azula firing the ball of lightning 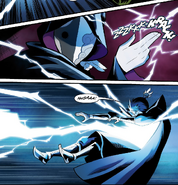 Returned as the mysterious Kemurikage 01 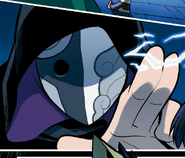 Returned as the mysterious Kemurikage 02 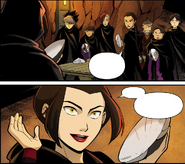 Azula clashing with her brother, again

Azula and her gang vanished 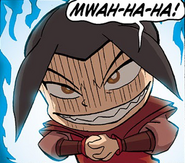 Azula in Avatar: The Last Air Bender - Into the Inferno the game

Azula vs Aang in the Avatar the Burning Earth Game (DS)

Azula sitting on the Iron Throne 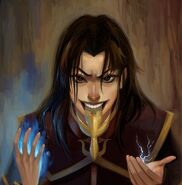 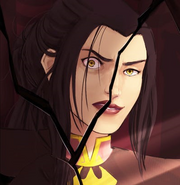 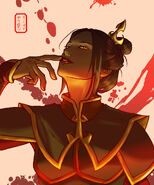 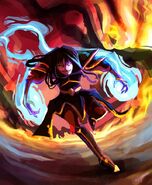 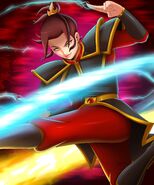