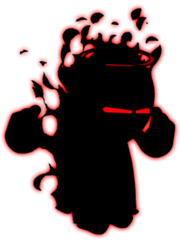 Auditor is one of the antagonists of the Madness: Combat series of flash animations.

Auditor is a shadow like figure (an employer) who's main goal is specifically kill Hank and taking control of Nevada. He attempts to do various tactics like sending grunts, surprise attacks, but to no avail. Eventually he is forced to face Hank and his friends face to face, but he learnt he could get more power from absorbing others and the dead bodies of others. He attempted to do this to beat Hank and his friends, but Tricky's body was, unfortunately for Auditor, one of the corpses absorbed, resulting in him exploding from the sheer power the clown had.

Auditor has been shown to summon various weapons.