Astro Boy is the main protagonist of the same title media franchise. He previously fought Mega Man in the 55th episode of Death Battle, Mega Man VS Astro Boy.

Atom (Known as Astro Boy or just Astro in English) originally appeared as a supporting character in the comic Atom Taishi (Ambassador Atom, sometimes referred to as Captain Atom), which appeared in Shonen, a monthly magazine for boys, in April 1951. Tezuka then created a comic series in which Astro was the main character.[2]Osamu Tezuka created Astro to be, in the words of Frederik L. Schodt (Creator of the English-language version of the Astro Boy manga), a "21st-century reverse-Pinocchio, a nearly perfect robot who strove to become more human and emotive and to serve as an interface between man and machine."[3] As Tezuka's art style advanced, Astro "became more modern and 'cute'" to appeal to the audience of boys in elementary school.[4]

Astro Boy, whose real name is Atom, is a powerful boy robot created by the head of the Ministry of Science, known as Doctor Tenma. He created him to replace his dead son, Tobio, after he died in a car accident. Dr. Tenma built Atom to resemble Tobio physically, and he treated him as if he were his real son. In time, however, Dr. Tenma realized that Atom could not fill the void leftover from the loss of his son since Atom could not grow or appreciate human qualities in the same way as a real child. As a result, Dr. Tenma rejected Atom, who then ran away and innocently signed himself over to a cruel circus owner named Hamegg. Hamegg used androids on his show for the amusement of others and was often very abusive to them.

After suffering in Hamegg's circus for an extended period, Atom met Professor Ochanomizu, the new head of the Ministry of Science. The Professor managed to make Hamegg turn the android over to him and became Atom's legal guardian. He soon realized that the boy robot was gifted with great powers, and that remarkably he was also able to experience human emotions.

Under Professor Ochanomizu's guidance, Atom used his powers to fight crime and injustice, such as prejudice since most of his enemies were robot-hating humans. He became known as Astro Boy, the world's greatest superhero, and went on to fight everything from robots gone mad, to alien invaders.

Main article: List of Astro Boy's powers. In nearly every series, it is stated that Astro has exactly seven superpowers which allow him to perform various tasks or attacks. His stated powers are usually never more than seven in a given series and have tended to change between series.

Of the many powers that have been shown or mentioned throughout the franchise, the following are the most common,

Attack Potency: Country-level (Comparable to beings on Robot Unicorn's level or higher) | City level | Small Planet level (On par with Atlas who threw his electric saber with enough kinetic energy to block the Anti-Proton Cannon) | Small City level (His charges and luminosity can yield this much) | Small Country level (Destroyed a satellite causing a large explosion as it fell inside of earth's atmosphere) | Continent level (Defeated Death Mask who heated the earth to temperatures comparable to Mars/Venus in a canonical bad ending) | Multi-City Block level (Comparable to the Peacekeeper) | Multi-City Block level+

Speed: Relativistic+ to FTL (Comparable to Zolomon, "blitzed" the Roboids, much faster than the Robot Unicorn) | FTL+ (Outsped a missile that flew to the sun at several times the speed of light) | Lightspeed (Comparable to Atlas who dodged EM beams, managed to outspeed the Anti-Proton Cannon and fly to Venus at the beginning of the series) | FTL (Flew this fast around the earth for fun) | Hypersonic (Can fly to low earth orbit in short time frames) | FTL (Flew from the sun to earth in a matter of a few minutes) | Hypersonic (Flew to Metro City from a few kilometers away in seconds) | Massively Hypersonic (Flew to outer space in seconds)

Stamina: Solar powered and able to refuel automatically, however, is still limited.

Astro Boy as he appears in the 1963 anime

Astro Boy as he appears in the 1980 anime 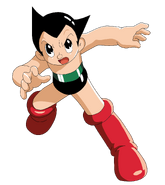 Astro Boy as he appears in the 2003 anime

Astro Boy as he appears in the 2009 film

Astro Boy in the 2009 film, with clothes