Ashley is a young witch from the WarioWare video game series. She lives in a haunted mansion, located in Diamond City, with her loyal assistant and friend, Red.

Ashley has brown hairs and eyes. She is wearing a red and yellow dress and shoes, and there is a yellow skull stuck on her dress. She also has a yellow barrette on her hairs. And most of the time, Ashley carries with her a yellow and red magic wand. When she is using magic/when she is angered, her hairs turn grey and her eyes glow red. 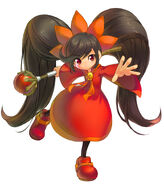 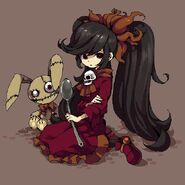 Add a photo to this gallery
Retrieved from "https://deathbattlefanon.fandom.com/wiki/Ashley?oldid=1218444"
Community content is available under CC-BY-SA unless otherwise noted.